Now Featured in the Patheos Book Club
Questions for 21st Century Church and Ministry Leaders in North America
It's About the Kingdom, Stupid!
By Jeb Gaither

Churches and Ministries face increasing challenges as they attempt to serve the Kingdom, given the reality of increasingly rapid changes in culture, technology, demographics and family structures of 21st century North America.

Answering questions like the following is increasingly urgent for our churches and ministries:

This book is written to open up conversations on issues like these by raising hard and difficult questions—questions that church or ministry leaders must think through and wrestle with to solve day-to-day challenges and to find their way into the future. 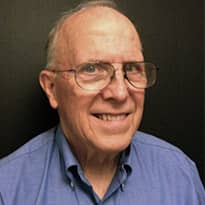 Making mistakes is a great way to learn. "If you make a mistake once, you are dumb. If you make the same mistake twice, you are stupid." I have a long lifetime of being "stupid," so the word stupid in the subtitle definitely applies to me.

The subtitle, "It's about the Kingdom, Stupid!" comes from a sign I have had in my office for many years. Its purpose is to remind me what I should be focusing on and—more importantly—how to go about my work as an entrepreneur/business owner, church elder, church planting team member, and ministry leader. As a flawed human easily distracted into building my own 'kingdom,' I need the sign as a reminder.

I was born before World War II and remember Pearl Harbor day. The war, with its death toll, ration stamps, air raid drills, the holocaust, and atom bomb, was the seminal event of my childhood and a major component of who I am.

During my formal education, I received a BS in Electrical Engineering from MIT, an MS and a PhD in Engineering from Case Western Reserve, followed by part-time post-doctoral studies in engineering, business, and Japanese at the University of Pennsylvania, the University of Delaware, and Indiana University. However, my best educational experience was an 18-month Machinist's Apprenticeship. It was not fun, often hot, dirty, and boring. However, we learned not only how to run machines but also, more importantly, spent time in every part of the company from the executive suite on down—an irreplaceable education about people at all levels and how organizations work and fail to work. Looking back, if I had to choose I would gladly give up all my degrees for my apprenticeship.

I was painting houses and laying plastic tile when I was eleven and have yet to stop working. Over the years I worked for a number of different companies, some of which were the largest in the world, and started a number of companies, some of which have done well and some of which were failures. I have worked in design, machine tools, R&D labs, chemical plants, steel mills, generating stations, material handling systems, robotics, arc welding automation, computers, and software. I have had the opportunity to partner with many different suppliers and customers throughout North America, Europe, the Middle East, and Asia, including grocery chains, heavy equipment manufacturers, aerospace companies, the space program, electronics giants, defense contractors, construction companies, and governments.

My wife Ann and I met when I was sixteen and she was fourteen and married seven year later. We have three married daughters living in Manchester, England; Atlanta; and Indianapolis, and six grandchildren.

I did not grow up in the church. I learned about the Bible as a young teen from a Jehovah's Witness and, while studying solid-state physics, became convinced that God truly exists and is the author of creation. My wife and I were married by a church planter. I became involved with church when, as newlyweds, we started attending his church plant, which was located in a renovated barn.