The Awakening of Hope: Read an Excerpt

We defile the holy when we love good things for our own sake, deadening our sense of intimacy and connection with God. When we use people and places to serve ourselves, we are not only untrue to our fellow creatures. We also distance ourselves from the Creator and from the part of ourselves that cries out for connection with the divine. Infidelity unravels the intricate fabric of the universe.

To make promises is to proclaim that a culture of mistrust has been interrupted by One whom we can trust. It is to live as a sign of God's faithfulness, even as we struggle to grown into fidelity ourselves. We make promises because we've glimpsed a picture of hope and know that it points us toward the life we were made for.

The ring I wear on the fourth finger of my left hand is a public sign of the promises my wife, Leah, and I made in marriage. When I turn it with my thumb, as I often do by habit, I think of Leah, our kids, and the commitments that make our shared life possible.

In traditional monasticism, there have likewise been signs to mark the commitments of those who make vows. As early as the Egyptian desert, the habit was worn by monks as a sign charged with meaning. In his Praktikos, the desert father Evagrius Ponticus explains how the cowl (or hood) symbolizes God's charity; the cross-shaped scapular, faith; the monk's belt marks rejection of impurity; and his staff is to lean on as he leans on the Lord.

"We see then," Evagrius concludes, "that the monk's habit is a kind of compendious symbol of all that we have described." In a sense, it sums up his life. As the mark of monastic vocation, a habit points beyond itself to a way of life that finds its end in God.

We make promises because they mark us as people who are turning from the rebellion of original sin to life with God in the membership of a new creation. To say "I do" in a world marked by infidelity is to stand out as a living sign that faithfulness is possible. It is possible because we know a God who makes promises and keeps them. We know this because we know the story of this God's relationship with the people called Israel.

The tradition of vows in monastic community has always been tied to a Rule of Life. Monks and nuns do not promise poverty, chastity, and obedience in the abstract as ideals that they would like to live out in whatever circumstances they happen to find themselves. Monastic vows are always promises made to God and a community under a particular Rule. These promises have concrete meaning within a way of life that is shared by a people. Poverty doesn't mean holding money loosely or owning things without letting them own you. It means giving the money and possessions you have inherited and earned away, joining a group of others who have done the same, and trusting God to provide for you in that particular community for the rest of your life.

In the same way, the promises that Christians make in marriage only make sense within the way of life we learn by being part of a people called church. We know what it means to give our body to another only to the extent that we have learned what it means for a community to claim our bodies in baptism. This will be a journey filled with joy as husband and wife delight in one another's bodies and welcome children as a fruit of that delight.

But Christian marriage is about more than what feels natural and good. Because we have died with Christ, we know that giving our body to another will mean bearing with them through afflictions—"in sickness and in health," as the traditional vows have it. Because we are members of God's family by adoption, we know we may have children who do not look like us. Because we follow a Lord who was executed, we know that we won't be able to make everything work out alright for our families in this world.

We know these things, as the monastic witness reminds us, because we are the spiritual descendents of the people called Israel. Both God's promises and ours in return find their content in the particularities of a shared way of life. We cannot find our way with God alone. While intimacy with God is always deeply personal, it cannot be private. "Me and Jesus" will not work. We're in this together, or we're not in it at all.

Since September 11, 2001, we in the West have become painfully aware of the fact that Islamic extremists do not make a distinction between personal convictions and political imagination. But if we listen to the millions of Muslims who are not extremists but fellow children of Abraham with whom we have much in common, we will learn that they are equally confused by the separation of faith and politics in the West. "My personal religion," makes no sense to them. They know it is a contradiction of faith to say, "Let's live together and keep our faith to ourselves."

We can learn from our Muslim neighbors what Israel learned at Sinai: to trust God is to join a community of people who make promises. Our promises find their meaning in the patterns and habits of the way of life we share together. Because this Way has been revealed to us, it is as much a gift as the promise that first inspired our faith. But because it is what makes us a people, this Way is not optional. To trust our God is to pay attention and keep the commandments that make us a people set apart in this world.

For the sake of the oppressed: The Bible, injustice, and race#3; Justice#28
Rob Dalrymple
2 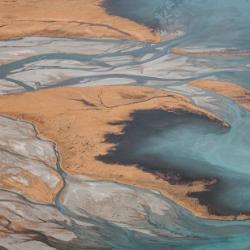 Do you have fewer than 3 friends? Here are 4 ways to deepen your connections
Jim Denison
Get Patheos Newsletters
Get the latest from Patheos by signing up for our newsletters. Try our 3 most popular, or select from our huge collection of unique and thought-provoking newsletters.
From time to time you will also receive Special Offers from our partners that help us make this content free for you. You can opt out of these offers at any time.
see our full list of newsletters
Editor's picks See all columnists