Most English speakers know something about King Arthur. He presided over a round table in Camelot, where he hosted feasts surrounded by brave and noble knights, whose mission was justice and peace. Le Morte D'Arthur, the fifteenth-century compilation of stories about Arthur and his legendary court, reports that his tomb bears the inscription, Hic jacet Arturus, rex quondam, rexque futuris: Here lies Arthur, the once and future king. It's a resounding echo of King Jesus, who will return in glory.

In this book, I want to explore the once and future mission of the Jesus people. Beginning with King Arthur seems appropriate, since my own Christian tradition, the Episcopal branch of the Anglican Communion, has roots that spring from the same English soil as the Arthurian legend. The Anglican tradition challenges believers to a radical way of understanding the meaning of mission—being sent out to proclaim the Gospel. It's a challenge not just for Anglicans, but for everyone. The meaning of mission is central to our lives as Christians and indeed to all people of faith. What will storytellers in future generations say about the community of believers? Missa sunt Christiani, ecclesia quondam, ecclesiaque futuris? That Christians were once sent out to be the Body of Christ—but will they also be the Body of Christ of the future?

Maybe it's odd to begin a book about church mission by invoking King Arthur. But maybe not. We could go down the lanes and byroads of literature and history, unearthing the myriad ways Christians have echoed the great stories of our faith in their own cultures and contexts. That work isn't finished, of course, and it won't be finished this side of the Second Coming. The way in which the great salvation story has been told or re-echoed in different cultures reflects both contemporary understandings of the meaning of a faithful Christian life and the eternal meaning of abundant life.

I'd like to explore some of the missional history of Anglicanism and indeed all of Christianity and see what it looks like to live a faithful Christian life, sent out by Jesus to love God and neighbor as self. We'll look at mission as it rose both from the Church of England and from the church universal. And we'll peer into the future, for a glimpse of how we might grow into an expanding vision of mission playing out in the particular contexts in which Christians live and move and have their being.

But what exactly is mission? It's about far more than people packing up their belongings and going to Africa or Asia to baptize non- Christians. The meaning of mission is much deeper and broader than that. The word comes from the Latin verb mitto, to send. It's the work that Jesus modeled himself and then sent his disciples out to do—feeding, healing, and teaching. The word "mass," and the "dismissal" at the end of the service, are derived from the old Latin command at the close of a service of Eucharist or holy communion: Ite, missa est. It means something like, "Go, you are sent." Or as a former bishop of New York used to say, "Get up, get out, and get lost." You've been fed—now get out there and lose your life in service to the world. That's what mission is all about, and you don't need a passport to do it.

The most frequently cited gospel mandate about mission is Matthew 28:19-20: "Go therefore and make disciples of all nations, baptizing them in the name of the Father and of the Son and of the Holy Spirit, and teaching them to obey everything that I have commanded you." Mission is evangelical—it's about spreading the good news and forming followers of Jesus.

But mission has a broader meaning, too, particularly as Jesus sets out in an earlier part of Matthew (25:34-40):

Then the king will say to those at his right hand, "Come,
you that are blessed by my Father, inherit the kingdom
prepared for you from the foundation of the world; for
I was hungry and you gave me food, I was thirsty and
you gave me something to drink, I was a stranger and
you welcomed me, I was naked and you gave me clothing,
I was sick and you took care of me, I was in prison
and you visited me." Then the righteous will answer
him, "Lord, when was it that we saw you hungry and
gave you food, or thirsty and gave you something to
drink? And when was it that we saw you a stranger and
welcomed you, or naked and gave you clothing? And
when was it that we saw you sick or in prison and visited
you?" And the king will answer them, "Truly I tell
you, just as you did it to one of the least of these who
are members of my family, you did it to me."

Seidensticker Folly #75: Why a Universe at All?
Dave Armstrong
2

Whoever Gives A Cup Of Water
Mary Pezzulo
3 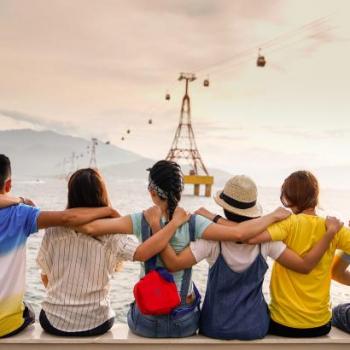 What Is the Children and Youth Program?
Brad Wilcox
About
Get Patheos Newsletters
Get the latest from Patheos by signing up for our newsletters. Try our 3 most popular, or select from our huge collection of unique and thought-provoking newsletters.
From time to time you will also receive Special Offers from our partners that help us make this content free for you. You can opt out of these offers at any time.
see our full list of newsletters