Death At The Movies: Read an Excerpt

He sits in his café, marinating in alcohol and resentment. His life of commitment and service has come to a bad end. He has left the field. Spiritually, Rick is a dead man walking. He has died to his previous life and cannot find his way into a favorable rebirth. What did happen to Rick? What could possibly have caused him to give up the good fight? Turns out, it's still the same old story, cherchez la femme. His "death" happened at a Paris train station when Ilse, the woman he loved, never showed up, even as the Nazis were invading Paris in May 1940. His spirit, his faith in humanity was crushed. Her betrayal so destroyed him that he decided nothing had meaning or value.

This stance is not uncommon in contemporary culture—cynicism as a defense against a lost or disappointing faith. Values collapse. Endlessly before our eyes on television, in the movies, and in real life we see people falling apart. Naked greed for sex, money, power is the dominant theme of a culture that has lost the innate truth of its raison d'être. It is all but impossible not to lose heart, not to shut down to escape the pain. So cynicism seems the only possible stance—and it's a powerful stance. From within this fortress of disappointment and denial of meaning, it is not hard to make anyone who believes in something look like a fool—so easy that a person's spiritual evolution can get stuck here, harden up into a truly rigid cynicism. It becomes a prison of the soul, the hardest cell to break out of on one's own. 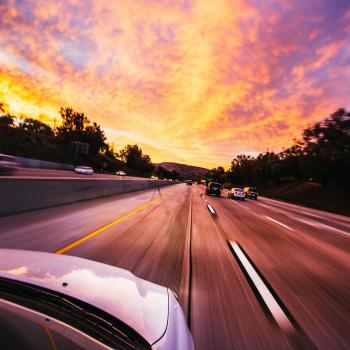 The Question of Beauty
Richard Simmons
2

Christians Need Their Faith to Be True
Neil Carter
4

My FAQ
Frank Viola
Get Patheos Newsletters
Get the latest from Patheos by signing up for our newsletters. Try our 3 most popular, or select from our huge collection of unique and thought-provoking newsletters.
From time to time you will also receive Special Offers from our partners that help us make this content free for you. You can opt out of these offers at any time.
see our full list of newsletters
Editor's picks See all columnists