Praise for How The West Really Lost God

"How the West Really Lost God is no syrupy lament for the days when we all said 'Merry Christmas' to one another, nor does the author carry on and on about 'Liberal Creeps Who Don't Believe the Word of God.' She posits, instead, a sociological disaster of recent origin. For various reasons, the family structures that supported organized religion began to deteriorate"

"In her new title, How the West Really Lost God, American cultural commentator and critic Mary Eberstadt weights the evidence and poses the question: How did it happen? Her approach to the subject is primarily historical and sociological and her findings should provoke a good deal of soul-searching on the part of evangelical Christians and churches.

There are undoubtedly many challenges that confront us in a Western world that has lost God, but by taking on board the central message of Mary Eberstadt's book and recognizing the pivotal role that the family has to play, we are also presented with a tremendous opportunity.

In a dark world where intact, stable and well-functioning families providing inter-generational support are rare, Christian families can shine bright lights and so bear eloquent testimony to the wisdom and power of God."

Getting to know Christ through the context of a family—knowing God as a loving Father and accepting the intercessory help and model of Mary and her courageous "yes" and Joseph and his quiet trust and leadership—can be challenging at a time when what exactly family is a matter of some confusion and contention in the public square and foreign to the lived experiences of many (a point Mary Eberstadt explores in her How the West Really Lost God).

Looking for a terrific book to read during your holiday travels? Pick up How the West Really Lost God. It's an insightful look at the link between the decline of the family and Christian religions in the Western World; a social shift that has touched every one of us...I hope you're curious enough to read the book. Why bother? Information is power. Eberstadt reminds us data overwhelmingly proves religious believers bring valued contributions to society and children raised in steady, traditional families, do better overall than those who are not.
—Linda Turley-Hansen

Overall, How the West Really Lost God was a fantastic book with a lot to contribute to our current discussions of faith, family, and culture. I highly recommend it. Since finishing the book and contemplating Eberstadt's ideas, my thoughts have turned to Monica, the mother of Saint Augustine. She was a woman in a mixed-faith marriage—her husband was a pagan. A devout Christian woman and a great intercessor for her son, she had the support of Saint Ambrose, the Bishop of Milan. We know that Augustine eventually became a Christian under the teaching of Ambrose and was baptized by him. We see, as Eberstadt rightly claims in her thesis, that faith and family are intertwined. Whether in the year 387 or the year 2013, God indeed uses the family to bring mothers, fathers, sons and daughters to the Faith.
—Luma Simms, author of Gospel Amnesia

Scholars will no doubt be sifting the evidence and weighing the arguments for some time to come, but if Eberstadt's insights prove accurate, one of her conclusions will be particularly troubling to thoughtful Christians: the doctrinal changes made by the mainline churches over the past three generations regarding divorce, contraception and, yes, homosexuality have been terribly and ironically self-destructive. By relaxing age-old standards on sexual morality, the churches have inadvertently undermined the foundations of the traditional family, thus precipitating their own demise.
—Michael Parker

Several theories have been proposed as to the cause(s) of secularization. Mary Eberstadt's book, How the West Really Lost God, is an important new addition to the debate... From the outset it is critical to pick up on the spirit of Eberstadt's book. Her subtitle, A New Theory of Secularization, highlights her approach. The author has a particular view and argues it with intelligence and conviction, but she is not making a dogmatic pronouncement.
—Scot McKnight 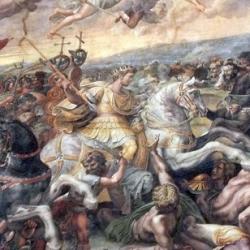