Jesus' Death and Our Fate, Part One: A Passage for Our Sake

Editor's Note:  This is the first of a two-part series on Jesus' death and resurrection, featured as part of the Patheos Book Club on Jesus and the Demise of Death. 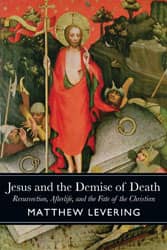 What can we say about all that Christ does after he is taken down from the Cross on Good Friday? The Church confesses that he descended into hell on Holy Saturday, that he rose again on Easter Sunday, and that he ascended to the right hand of the Father after revealing his glorified body to his disciples and teaching them for some time. We may be accustomed to thinking about the Cross and Jesus' sacrificial death as somehow intimately related to our lives as Christian disciples, even here in the 21st century. But what of Jesus' passage from death to life to ascension? It seems these actions and events also have much to do with our redemption inasmuch as they are signs of God's great love for us.

Some imagine Christ's descent into hell as his experience of complete separation from God. Some suggest the descent is his intimate experience of all the sin in the world. In other words, some suggest that Christ experiences damnation when he descends. But there are other ways to imagine this. In line with many voices in the Christian tradition, we could also describe Christ's descent as the journey of the Son of God to free the ancient saints of Israel. He descends to the holy ones who have been waiting, with joy and expectation, with hope and patience, for the promised redemption. Christ's descent, we might say, is the first fruits of the promise given to Abraham, Isaac, and Jacob. Mary knows this promise and it forms a central part of her Magnificat. Anna and Simeon know this promise and they rejoice in the arrival of the child, Jesus. And on Holy Saturday, faithful Israel experiences the fulfillment of the promise, as Christ's advent among the dead announces the beginning of the journey of all believers to resurrection life.

That idea—that we could experience resurrection after death—was an inspiring, emboldening idea for Israel before Christ's birth. The theme appears repeatedly in the Old Testament. And in the times preceding Christ's birth, people were wondering what God would do to reunite and restore Israel. In Christ's resurrection on Easter morning, Christians believe God gave his answer to Israel and to the whole world. The hope of eternal life with God is made a concrete, historical reality on that Sunday morning. God's covenant with Israel is not canceled, but instead is opened to the entire world. And so, just as Christ's descent into hell is the fulfillment of a promise made to Israel, Christ's resurrection is the confirmation of a hope held in the deepest parts.

But there's more! We see the beauty of God's justice in the resurrection, where the evil that took Christ's life is overcome, and human death is defeated by divine life. Those who follow Christ's humble, cruciform way can live with the assurance that all human evil, suffering, and even the final enemy, death, have been overcome by God—and all this for our sake. We see that Christ's life and ministry are confirmed, increasing our faith and enlivening our hope. With Job, we can say that we know our redeemer lives and that at the end of all things, we will rise to meet him.

The resurrected Jesus has also risen to meet God in his ascension to the right hand of the Father. Though it has long been the confession of Christians that God certainly has no "right hand" as we understand it, nevertheless, the phrase is key to understanding what God has done in Jesus, and what this means for us. In the ascension, we see the completion of the work begun at the Cross. Christ was torn down from the land of the living, even into the abode of the dead. But God's justice would not be mocked, and Jesus was raised, not simply to a restored earthly life, but to a place of power and authority. In ascending to the right hand of the Father, Jesus is assuming the place from which to reign over his people, the Church. From his exalted place with the Father, he rules as head of the body that is the Church. But he is there for us as well, seated in intercession, offering us to the Father and giving us the grace of the Holy Spirit. In the gospels we hear Jesus say that he goes to prepare a place for us. In his ascended place at the right hand of the Father, we begin to see all that this means for individual believers, for the Church, and for humanity. The ascended Jesus is one who is, even now, radically for us, ministering to us and giving us all that we need to complete our own passage to eternal life.