Live Free Or Die By Your Own Hand: A Book Excerpt

Book Excerpt from Chapter One "What Kind of People Do You Think You Are?"

I write as a visitor to America, but one who is a long-time admirer of the United States--though even that is suspect to some Americans. Some view an outsider's admiration as support for American cultural imperialism, while others suspect that fulsome compliments are simply a dose of syrup to prepare for another intemperate bout of anti- Americanism. On both accounts, quite the contrary.

It is a mark of healthy societies that, in times of change and crisis, they throw up leaders worthy of the hour. At this point, the United States urgently requires such a leader to lead and the nation to follow. But it is also plain that recent American presidents, entrusted with delivering the State of the Union, have been either unable or unwilling to address these particular issues--in the elder Bush's case, out of discomfort with "the vision thing"; in Bill Clinton's, being mired in scandal; in the younger Bush's, being preoccupied with terrorism and national security; and in Barack Obama's, being buffeted with global problems as no president before him.

Yet if the founders of the republic were correct, the ultimate challenge facing America will always be the enemy within--domestic rather than international. Intercontinental ballistic missiles, dirty bombs, cyber-security and the ferocities of terrorism notwithstanding, the deepest menace will not come from abroad but home. Many people quote Arnold Toynbee's repeated observation, "History shows that all great nations commit suicide." But the theme of this book owes far more to Abraham Lincoln's expressly American understanding of the challenge: "If destruction be our lot, we must ourselves be its author and finisher. As a nation of freemen, we must live through all time, or die by suicide."

No one who knows the classics well would be shocked by such bluntness, though many Americans today would be. Some people talk of the "loss" of freedom as if citizens mislaid it in a fit of absentmindedness. Others talk of the "miscarriage" of freedom as if the loss was unfortunate but caused by factors outside their control. I have even heard people talk of the "aborting" of freedom, as if someone could be rid of freedom but the ridder remains alive and well. To be sure, Americans have become some of history's grand masters of casual abortion, but that metaphor does not come close to the truth of what is happening with freedom. Lincoln was right: the precise term is suicide.

The free people of the American republic, who also happen to be citizens of the modern world's sole superpower, have no one to blame and nothing to fear but themselves. There is no question about the earlier menace of the Nazis and Communists, and now Islamic extremists, but in the end the ultimate threat to the American republic will be Americans. The problem is not wolves at the door but termites in the floor. Powerful free people die only by their own hand, and free people have no one to blame but themselves. What the world seems fascinated to watch but powerless to stop is the spectacle of a free people's suicide.

Not surprisingly, Americans are currently touchy about outside comments, and any criticism is apt to be heard as anti-American. Yet however long the odds and thankless the task, addressing the future of the world's lead society in a global era is too important to be left to its own citizens alone. America has long prided itself on being a "nation of nations." But though America is made up of peoples from all around the world, America's perspectives are often maddeningly parochial and sometimes give the impression of American autism.

This paradox needs to be overcome, not just so that America may listen to the world, but also so that the world may learn from the best of America. For one of the great ironies of our time is that just when the American experiment is more relevant to the world than ever before, America is in danger of alienating the world and cutting herself off from the source of her own greatness.

For all the vaunted parallels, the United States is not Rome, and she will not "fall" with twenty-first-century Visigoths rampaging down Pennsylvania Avenue. That is to confuse the "fall" of the Roman republic with the fall of the Roman Empire and to fail to recognize how Americans themselves are already the destroying vandals of their own heritage.

Nor is the United States Europe, and Americans will not follow the European path. But just as the collapse of European civilization was so cruelly exposed in the two World Wars and long prefigured in the warnings of Jacob Burckhardt and others, so America's writing on the wall is evident to those who are watching now. Nearly a hundred years ago, the world's last great empire, from whom Americans won their freedom and whom they have succeeded, was almost undone through a foolish policy of appeasement ("peace, peace, when there was no peace"). America's problem today is different but equally perilous: a general complacency bred of long prosperity and recent supremacy in world affairs ("All is well, all is well, when all is not well"). It is time to wake again.

Os Guinness (D.Phil., Oxford) is the author or editor of more than twenty-five books, including The American Hour, Time for Truth and The Case for Civility. A frequent speaker and prominent social critic, he was the founder of the Trinity Forum and has been a visiting fellow at the Brookings Institution and a guest scholar at the Woodrow Wilson Center for International Studies. He lives near Washington, D.C. 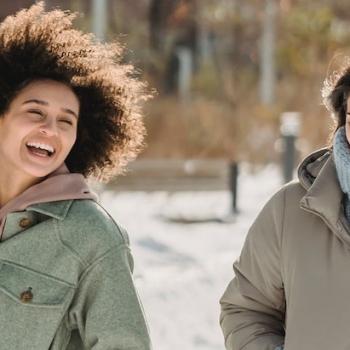 Don’t Call Me a Content Creator
John Beckett
About
Get Patheos Newsletters
Get the latest from Patheos by signing up for our newsletters. Try our 3 most popular, or select from our huge collection of unique and thought-provoking newsletters.
From time to time you will also receive Special Offers from our partners that help us make this content free for you. You can opt out of these offers at any time.
see our full list of newsletters