Death Is an Illusion: A Q&A With Author Peter Baldwin Panagore

What happened to your sister?

After she was arrested for neglect—I think basically from poverty—she called my parents who paid her bail. Her babies were in the care of the state of Oregon and she left them there and fled to Canada, and eventually to Alaska where she met an orthodox priest who helped her reconcile a bit by phone with our dad, and returned home for a brief time. She found that we had adopted the older girl, but grandparents had no rights and we could not adopt the baby. We lost track of the baby for thirty years. Andrea (my sister) moved to Jamaica, married, lived there for years, and eventually died of a heart attack in South Beach Miami in a situation that the police thought for six months was murder.

How did you mother deal with that?

When Andrea died, after we finally found out it was a heart attack, mom found some peace at last. At least she knew in her heart that Andrea was at rest. And then, last summer, the Alaska priest tracked me down on Cape Cod where I was visiting my mom and dad because he found a postcard that Andrea had sent him when she returned to Boston. He told us a part of Andrea's story when she was in Anchorage, how she lived with him and his wife. That night on Cape Cod last summer was cathartic for my mom who wailed the deepest and most painful crying that I have ever seen or experienced. Her pain hurt so much my insides vibrated. That cry healed my mom, cleaned her out, and gave her a strength that I have not seen in her since I was fourteen, and strangely, her crying healed me too.

Near Death Experiencers claim to have other worldly experiences after they come back? Some say they see dead people, other say they cannot wear watches. What about you?

I've had my share of miracles and strange events. The first one was the freeing of the rope immediately after my return here from heaven. It feels to me that I can feel souls inside or radiating out from living people—I feel their prana; I feel their chi. Everyday I live with recurring deja vu twenty or thirty times a day. It is as if I have seen all of my life seconds or minutes before it happens. I gave up wearing watches because they just kept stopping. It got expensive to keep replacing them. I dream vision dreams and occasionally have what the Christian contemplatives and mystics call The Unitive Experience. I sometimes hear the Voice of God calling my name deep, deep inside me—it can be disconcerting.

You talk about midwifing in reverse. What do you mean by that?

When a person is dying I can give them comfort, with my words, with the radiant presence of my soul, with the light that shines through me, and in doing so help them more easily transition in to death. I have done so many times as a pastor with those who are dying slowly in hospitals, hospices and homes, and once with a man who died quickly of hepatitis C in my arms.

You mentioned that all people are equal in your eyes. How? Why?

God is the Only Real there is. God is the measure by which I see all others and myself. I don't choose this, it just is. The greatest and the smallest amongst us are the same when seen from a mile above, from God's height above. God is the measurement and all is less than God. God creates us all— as humans we are all broken, and so in the measure of their sins, none are greater and none lesser, and all are sacred souls individually and completely beloved of God, and each is equally loved. I see that, I feel that, I think that.

Do you still pray for your death?

The monks told me that in their monastery that those who pray for an early death are condemned to live the longest. I prayed for my death every day for twenty-five years, even after I was married, even after I had kids. It stopped one day. I was meditating and God plucked me out of myself and brought me to a place of celestial sound and when I came back hours later, as my wife and kids watched, I was healed, made whole here, and found a stream of peace flowing through my belly, as if there was a hole there for it to flow through. The flow lasted six months, even through the pain of a serious accident and the surgery and recovery that followed. The flow stopped but a peace entered me and I stopped praying for my death.

And then a couple of months ago I started praying for my death again.

God said to you, 'You won't live your life.' What did that mean? What is the purpose of your life? 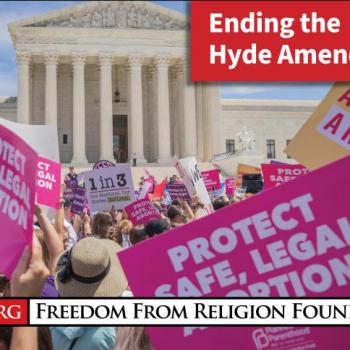 Postcards from the class & culture wars (4.13.21)
Fred Clark
Get Patheos Newsletters
Get the latest from Patheos by signing up for our newsletters. Try our 3 most popular, or select from our huge collection of unique and thought-provoking newsletters.
From time to time you will also receive Special Offers from our partners that help us make this content free for you. You can opt out of these offers at any time.
see our full list of newsletters
Editor's picks See all columnists