About the Book There's a certain kind of lost a boy feels in this world without a father. Tim felt it. I felt it. And we realized our only way out would be together.

In an openhearted memoir of faith on the fringe, Roger Thompson meditates on the life and premature death of his best friend and business partner, Tim Garrety, cofounder of Skate Street Ventura.

Roger and Tim's twenty-year friendship was forged in the surf and on the streets of 1980s California. Together they hazarded countless waves and every rite of passage—from guitars to girls to God—and influenced the lives of thousands of skateboarders, musicians, surfers, and otherwise disconnected youth in the process.

With unrestrained honesty and a punk-rock soundtrack, My Best Friend's Funeral is a memoir of friendship, doubt, surfing, and the complex relationships between fathers and sons. If life has ever left you feeling abandoned — or if you simply prefer a rock show to a sermon — My Best Friend's Funeral is a memoir you won't want to miss, and a confirmation that you are never alone. 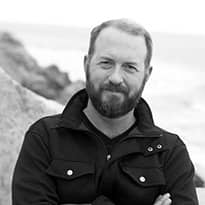 Roger W. Thompson advocates for orphans in Haiti with the Hands and Feet Project, and produces surf movies with Walking on Water Films. When not working, Roger can be found fly-fishing, building furniture, and surfing with his sons near the coastal town of Ventura, California, where he lives with his wife, two young sons, one old dog, and seven productive chickens.