Dallas and the Spitfire: About the Book

Now Featured at the Patheos Book Club
Dallas and the Spitfire:
An Old Car, An Ex-Con, and an Unlikely Friendship
By Ted Kluck and Dallas Jahncke

Discipleship Isn't a Program, It's a Relationship

Ted is a thirty-four-year-old father of two who's been going to church his whole life. Dallas is a twenty-one-year-old former cocaine addict with a prison record. When they agree to meet regularly for "discipleship," they know that chatting once a week in a coffee shop just won't cut it. Restoring an old Triumph Spitfire is more their style.

This is not "12 Steps to Mentoring a Man for Christ" or "The Blockhead's Guide to Discipleship." This is real life. It's the true story of a guy a lot like you and another guy nothing at all like you. It shows how real men can be friends with one another and get closer to Jesus. It isn't easy. It isn't a checklist. If you have a rigid system in place, you're doing it wrong. It's all about living life for others.

"At the risk of embarrassing these nitty-gritty guys, this is ultimately a story about love—learning to love God when life is hard and to love each other as brothers. I could hardly put the book down, and am very happy to recommend it."
—Justin Taylor; blogger, "Between Two Worlds"; managing editor, The ESV Study Bible

"Kluck, an award-winning author (Why We Love the Church), teams with an ex-con he is mentoring in this odd-couple Same Kind of Different as Me feel-alike. The two men decide to fix up a vintage Triumph Spitfire in order to bond as Christian men.... the book chronicles how they buy a broken-down sports car and bring it roaring back to life over a year of friendship, trials, and triumphs of their own. Jahncke is new to writing, but the tattooed ex-con recovering addict writes vividly ('If you have ever romanced coke yourself, you know she's a high maintenance girl'), but also more reverently than Kluck, whose cheeky banter comes with footnotes used to squirrel away humor. The book is less about a car than about the lasting friendship that forms between the men. Despite a few flaws, the authors have put together a triumph."
—Publishers Weekly 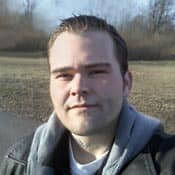 Dallas Jahncke is 21 years old, has attempted suicide three times, and has been in jail twice, but is today sober, productive, and attending Bible college. He is a member of University Reformed Church in East Lansing, Michigan.

Ted Kluck is an award-winning author and freelance writer. He has written seven books and his work has appeared in such places as ESPN the Magazine and Christianity Today. His first book won a Christianity Today Book of the Year award. Ted lives in Grand Ledge, Michigan, with his wife and two sons.