Note: This is Part One of a three-part series.

When I didn't know myself
where were you?

Like the color in gold,
you were in me.

I saw in you,
lord white as jasmine,
the paradox of your being
in me
without showing a limb.—Mahadeviyakka(1)

Every day, priests minutely examine the Dharma.
And endlessly chant complicated sutras.
Before doing that, though, they should learn
How to read the love letters sent by the wind
and rain, the snow and moon. —Ikkyu(2)

Religions often hold a tension between immanence and transcendence, the latter indicating that God or the Holy One, as Wholly Other, decisively extends beyond mundane reality, the conditioned, changing phenomena constituted in time and space. Such a vision is quite commonly seen in theistic traditions, with God or the Supreme understood as "being" far beyond the changing flux of created order. Versions of Buddhism suggest transcendence, too, as nirvana decisively trumps, as it were, conditioned reality. Indeed, nirvana, in early Buddhism, is the single unconditioned dharma or factor of existence. It is a "state" that finally transcends the shifting, unstable set of conditions that constitute phenomenal reality, and this includes, for Buddhists, our karmic predilections that lead to the cycle of suffering and rebirth known as samsara. The spacious dharma-field is unconditioned, a state or plane of reality beyond suffering and the crushing cycle of change.

At the same time, religions also point to the immanence of the divine, the belief that the divine—God, Brahman, Buddhanature, the Tao—is present right here, right now, often in hidden, even mysterious, ways. Years ago, I conducted prison poetry workshops, and once a participant remarked, "People are always looking for the parting of the Red Sea, but don't see the little miracles before their very eyes." He then recounted a story of finding an abandoned kitten on his front lawn, a discovery that ultimately drew him out of a suicidal depression; the kitten needed him, but he needed the kitten, too. By caring for her, he found himself engaged, attentive, and positive. "That kitten saved my life." His story vividly communicates an essential truth seen in the religions of the world, that grace or the holy presence is undeniably close, even if, at other times, it may feel painfully distant.

Later Buddhism, especially that informed by developments in Mahayana thought, very much becomes a religion with a highly immanent sensibility. Thinkers in this tradition extended certain strands of early Buddhist thought. The no soul doctrine—the absence of a permanent substrate of personality—for example, becomes extended in "emptiness" doctrine, the notion that nothing exists on its own terms; nothing emerges intrinsically or by its own power, nor does anything exist fully self-contained and self-enclosed. This way of seeing reality thus destabilizes the notion of separate, individual, independent entities and instead weaves a more inclusive identity, a union with all phenomena. For if I am not separate, isolated, and independent, then I am connected, related, and inter-dependent. Thus nothing and no one are irrelevant to us. We are united, connected. The unity of the all, in Mahayana, is understood to be a pristine expression of buddhanature or "suchness," that is, reality such as it is. And this pristine reality is available to us right here, right now. We don't have to go looking for it. This buddhanature suffuses, as it were, all phenomenal reality. Indeed, it is phenomenal reality. In this case, reality already is nirvanic, but it becomes samsaric under the spell of self-centeredness and ignorance.

We might say, from a theist perspective, if God is, God is here. If the divine is, the divine is here. And to see God or the divine doesn't mean contorting information to buttress weak faith, somehow prettifying ghastly events with empty, disturbing claims that "it's God's will." The fact is that brutal, terrible things happen in the world, owing to cataclysmic natural events and the evil choices of humans. Nonetheless, if God is, God is here. It would seem unlikely that a being or reality who or which is unconditional compassion and wisdom would not manifest or express hints or touches of such presence, offer some savor, some grace in destitution or deprivation. Were God to leave us totally bereft, one might charge the divine with being niggardly, if not cruel. What romantic partner or parent doesn't want to express his or her love, in very concrete, real terms, by sustained acts of thoughtfulness and generosity? The very embodiment of love is contained—and seen—in those gestures. And they are encouraging and nourishing at the deepest levels. They can become as a cup of cool water in the desert. The proper response to that is gratitude. 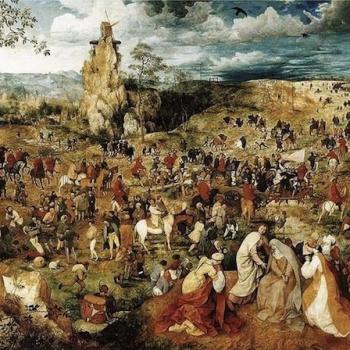 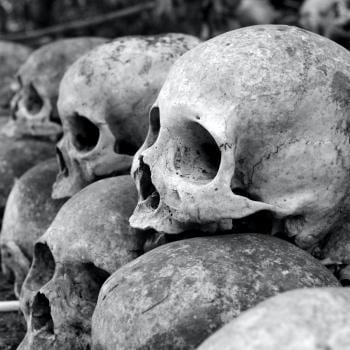 Dear Mortellus: How do I know if I’m a Necromancer?
Mortellus
4 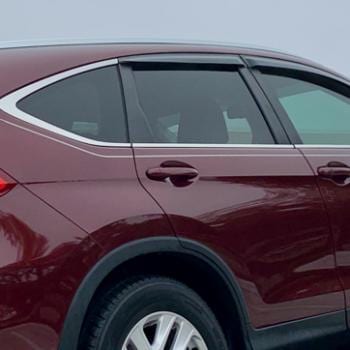 Vroom! Vroom! (On Buying an Automobile and Empowering Employees)
John Mark N. Reynolds
Get Patheos Newsletters
Get the latest from Patheos by signing up for our newsletters. Try our 3 most popular, or select from our huge collection of unique and thought-provoking newsletters.
From time to time you will also receive Special Offers from our partners that help us make this content free for you. You can opt out of these offers at any time.
see our full list of newsletters
Editor's picks See all columnists