"Oh world, I know you now!" the young man shouted in disgust, leaving the courtroom. For eight years, Alphonsus Liguori practiced law in Naples, and had never yet lost a case. He certainly didn't expect to lose this one, a seemingly simple land dispute. But he did, and he resolved never to practice law again.

After London, Naples was the largest city in 18th-century Europe. The German author Goethe called it "a paradise" where people lived "in a kind of self-forgetful intoxication." Another observer described:

Its sun, its joie de vivre, its tumultuous celebrations. The world's most excitable people in the tortuous little streets; unequaled vitality and curiosity of mind, an intense crusade for culture.

In art, it was the age of the baroque; in philosophy, the age of the Enlightenment, a period when faith and reason were increasingly separated in the popular mind.

Alfonso Maria Antonio Giovanni Francesco Cosimo Damiano Michel Angelo Gasparro de Liguori was born on September 27, 1696, to a prominent Neapolitan family that included a long line of judges, soldiers, lawyers, and administrators. A career naval officer, Don Giuseppe was a loving, stern and domineering father who felt priesthood was not an option for Alphonsus.

Alphonsus inherited both his mother's pious compassion and his father's tenacious temper. Long interested in the priesthood, he wasn't prepared to go against his father's will until he realized law wasn't his real calling. Although this involved a struggle with the Captain, he finally won and was ordained a priest in 1726.

If Naples was a paradise for the rich, it was the opposite for the poor, banished to the surrounding hills. Their lot was poverty, malaria, death, and backbreaking labor. Prayer and discernment led Father Alphonsus to conclude that God was asking him to serve those people known as "the damned of the earth."

Like-minded priests gathered around him. Alphonsus had long replaced fear of God with love of God. His primary image of Jesus was that of redeemer, regenerating the world with His love. The new community, founded in 1732, was called the Congregation of the Most Holy Redeemer, and its members Redemptorists.

Their goal was to follow Jesus the Redeemer in preaching the Good News to the poor, "a vocation for the abandoned." Through the parish mission, a week-long religious revival, they aimed at rebooting the community's spiritual life through preaching, Mass, and confession. They traveled throughout rural Italy to the poorest of the poor.

In preaching, Alphonsus avoided fire and brimstone. True conversion of heart, he argued, couldn't be based on "fear of divine punishment." These lasted "only as long as the fear lasts." A real conversion occurred when "God's holy love enters a heart"; therefore, the preacher should aim to "leave his audience inflamed with holy love."

Alphonsus butted heads with the Jansenists, a rigorist group within the Church stressing humanity's inherent depravity and unworthiness of God's love. They opposed frequent reception of Communion on the basis of human sinfulness. Alphonsus responded:

I know that the angels are not worthy of taking Communion; but Jesus Christ has made human beings worthy of the Eucharist. He has raised people out of human misery.

Alphonsus was also a talented musician, artist, and writer. Verdi once said that Christmas wouldn't be Christmas without his Tu Scendi Dalle Stelle ("From the heavens thou comest"). He composed eleven volumes on moral theology, less for academic circles than for priests in the confessional. In books such as Visits to the Blessed Sacrament, The Glories of Mary, and The Practice of the Love of Jesus Christ, he replaced the angry God of the Jansenists and the impersonal God of the Enlightenment with a loving, personal God.

His success was due to an accessible style, for the "the person in the street." Writing was a form of ministry, a "means of diffusion of the gospel among the poor, just as music, painting, and poetry were."

In 1762, 66 years old, Alphonsus was named Bishop of Sant' Agata dei Goti in southern Italy. He initially refused, but the pope forced him to accept. A bishopric was no easy task: dealing with unruly clergy and religious, ministering to famine-stricken people, living in voluntary poverty himself. Its burden, he wrote, "leaves no room to breathe." But he kept his sense of humor, telling a friend:

Laugh over these little trials and all the rest . . . He who loves Jesus Christ fears nothing, and to please Jesus Christ he suffers everything joyfully.

Through the years, Alphonsus' health really had deteriorated. His eyesight, always poor, now got worse. He was going deaf and was bent from arthritis. Still, people recalled his "heavenly face . . . gentle, joyful, and kind." Others described him as "scholarly yet pastoral, prayerful and practical, strong-willed but tenderhearted."

The Exodus of Single Women From Christianity Continues
Cassidy McGillicuddy
2 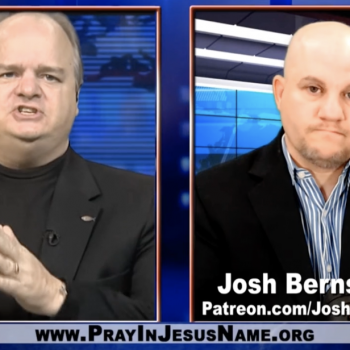 Abby Johnson and the Problem With Pro-Life Heroes
Emily Claire Schmitt
Get Patheos Newsletters
Get the latest from Patheos by signing up for our newsletters. Try our 3 most popular, or select from our huge collection of unique and thought-provoking newsletters.
From time to time you will also receive Special Offers from our partners that help us make this content free for you. You can opt out of these offers at any time.
see our full list of newsletters
Editor's picks See all columnists