Boniface Wimmer and the Benedictines in America

By the start of the 19th century, the Benedictine Order in Europe had almost reached its nadir. The French Revolution had destroyed many of its great houses, while Napoleon and his minions confiscated others. Over the next few decades, however, the order underwent a rebirth on both the continent and abroad. By the late 1800s, America, for one, had a vast network of Benedictine monasteries, schools, and churches, all due largely to one determined monk labeled "the greatest Catholic missionary of nineteenth century America."

He was born Sebastian Wimmer in Bavaria, a tavern keeper's son, on January 14, 1809. As a young man he considered careers in the military and the law before discovering a vocation to the priesthood. At age twenty-two he was ordained for the Diocese of Regensburg, but soon he was increasingly attracted toward the communal life of a religious order. (As a diocesan priest, he felt "entirely left to myself.")

In 1832 he entered St. Michael's, a thousand-year-old monastery in Metten. He was named Boniface for the saint who evangelized Germany. He taught in the monastic school, but his interest was turning toward America, where thousands of German Catholics were sailing yearly. Wimmer dreamed of establishing the order in there, just as his namesake had in Germany. (While individual Benedictines were working in America, no communal life yet existed.)

Mocked as a dreamer by his fellow monks, he refused to accept rejection. He was determined, he told his superiors:

If I cannot work in America as a Benedictine, I will go in another habit . . . I can be delayed and retarded, but not stopped. I can be persecuted with suspicion and distrust . . . but I will go my way because I freely believe that God wills it.

"I have firm convictions," he added, "and others will have to follow me." In 1845, he wrote, "it cannot be a matter of indifference how our countrymen are situated in America." The Benedictines were ideally suited to missionary work, he added, citing their early work in evangelizing northern Europe. Furthermore, he insisted that the order's rule was

. . . so constituted that it can readily adapt itself to all times and circumstances. The contemplative and the practical are harmoniously blended; agriculture, manual labor, literature, missionary work, education were drawn into the circle of activity which St. Benedict placed before his disciples. 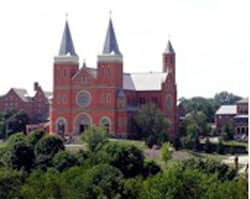 In the summer of 1846, Father Boniface got permission to sail, with fourteen brothers and four seminarians. In Latrobe, Pennsylvania, Bishop Michael O'Connor of Pittsburgh offered land, a house, and a parish. Thus, in a two-story schoolhouse, as Wimmer's biographer Jerome Oetgen notes, was "formally inaugurated Benedictine monastic life on the continent of North America." In time, Wimmer said, "I understand English now to the extent that I can preach just barely, hear confessions, catechize, and argue with the Protestants."

Out of these humble beginnings grew St. Vincent's Abbey, a seminary, a college for lay students, all geared largely toward the German-American community. (In 1860, he started a brewery that produced "St. Vincent Beer," raising objections from some temperance-minded bishops. It closed in 1920.) By 1850, there were sixty members in the Latrobe community. "There is no place in America," Wimmer boasted, "where prayer ascends to heaven so constantly!"

But Wimmer planned to extend the Benedictine way of life nationwide, beyond the German community. Within a few years of Latrobe's founding, he was getting requests from bishops from all parts of the country. During the 1850s, monasteries and schools opened in rural and urban areas: Newark, New Jersey; Atchison, Kansas; Collegeville, Minnesota. He expanded:

Our customary tendency to move forward must continue. Forward, always forward, everywhere forward. We cannot be held back by debts, by the difficulties of the times, by unfortunate years. Man's extremity is God's opportunity . . . Everywhere there is need for priests, especially in the Far West.

Wimmer had a dynamic understanding of the Benedictine rule: "Christ said, 'Go and teach all nations.' Stability is a beautiful virtue, but it should not develop into immobility."

A strong-minded individual, Wimmer could be unrelentingly authoritarian. As Benedictine historian Joel Rippinger notes, he "could ruthlessly squash the suggestions of any subordinate whose opinions were not in accord with his own." (At a time when most clergy were clean-shaven, Wimmer sported a full beard. After Pope Blessed Pius praised it during an audience, Wimmer mandated beards for all his monks.)

In the years following the Civil War, Wimmer's monks spread South and West, expanding their evangelization efforts to Native Americans and African-Americans. Monasteries were founded in Alabama and North Carolina, to work with "these entirely neglected Negroes" and to enter a region "where there are very Catholics . . . How wonderful!" In the Indian Territory (now Oklahoma), Father Isidore Robot started St. Gregory's monastery, now home to St. Gregory's University, the state's only Catholic institute of higher learning.

Abbot Boniface Wimmer died at St. Vincent's on the morning of December 8, 1887. To a large extent he had successfully implemented his vision of the order as an effective educational and missionary institution nationwide: monasteries and convents; schools and colleges; hospitals, parishes, and retreat houses. Today, thanks to the priests, religious, and laypeople who live the order's charism in their daily lives, the spirit of St. Benedict is alive and well in the United States.