Eucharist Among the Brambles

Last weekend, we attended the ordination of the young man we have been supporting with our prayers as he moves toward the priesthood. He was ordained a transitional deacon, along with nine others. The liturgy was absolutely beautiful and it was very impressive to see the strong faith and dedication of these fine men.

Ed and I were "matched" with Lenny only a few months ago, but we have been praying for him much longer—ever since we signed up for an archdiocesan "adopt a seminarian" program. We didn't know who we would be matched with, but we knew that the Lord did, so we began praying immediately. Finally, we had a chance to meet him, and we could tell right away that the Holy Spirit had a plan for this connection.

This program matches families with one of the 100 seminarians in our archdiocese; the families commit to following the seminarian through his discernment process with prayer and friendship—including him in our family events, and getting to know one another. We look forward to attending the milestones as he journeys toward the priesthood, and hope to continue beyond that, through prayer and friendship in his ministry. Priests need our prayers all through their lives.

On Sunday, we attended his first official Mass as a deacon. There were twenty children making their First Communion in that parish, and as such he geared his first homily to the kids, but he did a great job in reaching the adults as well—that's not always easy to pull off.

Our seminarian has a Masters degree in education and taught math before entering the seminary, and it showed; he invited the kids to come up to sit on the top step so that he could talk with them as he explained the Gospel and how the Scripture related to making their First Communion.

The Gospel was John 15: 1-8, where Jesus says, "I am the true vine and you are the branches . . ." Lenny pointed out to the kids that Jesus says over and over, "Remain in me, and I remain in you." He emphasized the word remain—stay with me . . . stay close to me." Bringing out a vine he had dug up that morning to use as a concrete visual, he explained the Gospel in simple terms and involved the kids in a conversation that circled in to what they were doing in receiving communion that day, but the lesson had application for the adults as well. We were impressed; Lenny will make a fine priest one day, following the example of the Lord who taught in simple examples his listeners could relate to.

I prayed for the First Communicants that their day would be as powerful as mine was. If there is one day in my personal life I can point to as the first moment that it all came together for me in my relationship with God, it was that day. It was the day I knew that I knew, and I have never doubted. It is hard to explain how I felt, but at one moment I knew God was with me. Over the years, I have had been "pruned," but each time it has only brought me closer to him; it has been necessary for growth and for the production of fruit in my life.

Last year at this time, we were in Rome, and it was very special for me to be able to receive communion and to attend Mass at the Vatican on the very anniversary of my First Holy Communion. I remember that day in a special way each year, but that was a real gift to me.

On our wedding day, besides the wonder of exchanging our vows, a most special moment came when Ed and I gave each other communion. The priest placed the host in each of our hands and we gave communion to each other. He then gave Ed the chalice, and he presented it to me; I did the same in exchange. It was a profound moment for us; it proclaimed that our marriage wasn't just between Ed and me, but that the Lord was with us, and we always could count on Him to remain as a partner with us in our marriage. Whenever Ed and I walk up to receive communion together, it reminds us of the sacrament of our marriage and the gift of the unity with the Lord as we receive Eucharist together.

If this isn't a prolife issue, then nothing is
Edwin Woodruff Tait
2

"Sanctified Sinophobia" and the Role of Christian Nationalism in Anti-Asian...
Melissa Borja
3 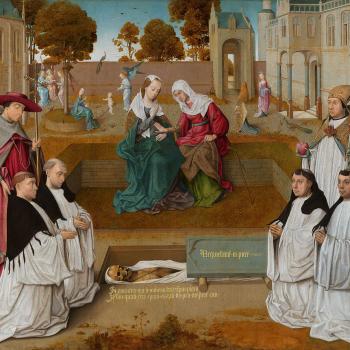 Abortion and the Theologians
Gene Veith
4

Publius - A Saint of Hospitality
Billy Kangas
Get Patheos Newsletters
Get the latest from Patheos by signing up for our newsletters. Try our 3 most popular, or select from our huge collection of unique and thought-provoking newsletters.
From time to time you will also receive Special Offers from our partners that help us make this content free for you. You can opt out of these offers at any time.
see our full list of newsletters
Editor's picks See all columnists