In Defense of the 'D' Word

At the popular website, The Art of Manliness, a much-read piece—and one of its most imperative reads for today's young men—famously challenges the aspiring man to stop hanging out with women and to start dating them. That's solid advice, particularly for those whose future dreams include finding one woman to settle down and spend the rest of their lives with. You know I do so hate to be the bearer of bad news, boys, but it's time to face the music: Just hanging out with a girl does not put you on any kind of purposeful path toward matrimony with her. So sadly, just hanging out with girls absolutely guarantees that you won't even set foot on that enviable path toward marriage.

For the sake of argument, let's just assume that you've already been won over here. You agree that you ought to start dating. Congratulations and whoop-dee-doo. Now what?

In ye olden days, there was an established social script for this kind of thing. Once upon a time, the lovely lady in waiting extended an invitation to her potential courters, who, if they so desired, could call on her when she was in and then do their best to woo her to their cause. A generation later, the norm changed, the new expectation being that the gentleman would approach the lady who caught his fancy, and then, oh so suavely, request the opportunity to take her out on Friday night.

The relative merits of such customs are, of course, highly debatable. My point is not to hold them up as universal ideals worthy of our eternal emulation. But, love them or hate them, at least in our parents' day they had a set of customs, any set of customs, surrounding the dating game. We really don't. Our generation lacks any coherent social script for this kind of thing, and as a result, our attempts to start the dating process can be a little, ahem, messy.

Put yourself in the girl's shoes for a second. Today, if a guy you know comes up to you—or worse, texts or "Facebooks" you—and asks if you would like to grab dinner on Friday, what would you make of it? Especially since, in all likelihood, y'all grab dinner pretty frequently anyway, just hanging out as per usual. Does it even cross your mind that you just got asked on a date? Maybe.

But are you sure about that? Doubtful.

And even when you finally get to Friday night, no matter how great the dinner is, you still probably won't have answers to most of these questions at the end of the night. You'll be just as confused as before, only now you'll have more material to scrutinize and torture yourself with, perpetually wondering, "What is this thing? What is his intention here? What are we doing?"

All right men, time to take those lady shoes off now. I'm dropping the scenario and talking to you man-to-man again. What do you think the above thought experiment is supposed to illustrate?

It's a sad fact, but whereas our dads could charmingly (or not so, depending) ask a girl to a Friday night dinner and expect their intentions to be perfectly well understood, we simply do not have that luxury. Sans social script, it remains completely unclear whether we are asking her just to save the date for a dinner, or to let us take her out on a dinner date.

How do we overcome this ambiguity bequeathed to us by our contemporary hang-out culture? My recommendation is both radical and simple: Just call a spade a spade. Or here, call a date a date.

Yes, I realize that it's all kinds of awkward to say, "Hi there. Could I take you out on a date tomorrow night?" There used to be more debonair turns of phrase at our disposal, here. But unfortunately, today there seems to be no other way to say it that really drives the point home. So even though you'll probably sound a little lame, man up and get over it. Use the 'D' word. If she's worth taking out, she'll forgive the graceless proposition. Especially since she'll be flattered at the invitation, and oh-so-thankful for the clarity.

And on the bright side, if the proposition is really that awkward sounding, then the relationship can only go uphill from there.

Men, stop "hanging out" with women and start (explicitly) dating them. 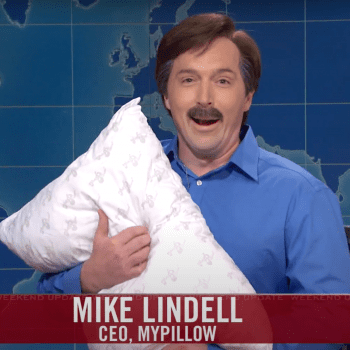 The Corner Crone: Survivors of the Siege
Martha Kirby Capo
Get Patheos Newsletters
Get the latest from Patheos by signing up for our newsletters. Try our 3 most popular, or select from our huge collection of unique and thought-provoking newsletters.
From time to time you will also receive Special Offers from our partners that help us make this content free for you. You can opt out of these offers at any time.
see our full list of newsletters
Editor's picks See all columnists