An Observation on Pain: Don't Waste the Treasure

C.S. Lewis famously wrote that God shouts to us in our pain. It is, he said, God's "megaphone to rouse a deaf world." But rarely does it change us. Maybe we don't recognize his voice. Overwhelmed by frustration and anger, perhaps we are loath to hear his plea. Mostly, we linger. Mostly, we remain paralyzed.

Physical pain is unavoidable. Defiled by corruption, destruction, disintegration, and decay, our flesh incessantly pursues its return to the earth. Our bodies begin to die from the moment of conception, the clock ticking off the finite years, days, and hours of our physical existence from even before our birth. But emotional pain is no less insistent, no more willing to take a back seat. Often, it presses itself to the forefront, overwhelms our being, and triggers physical distress. Our family and friends, our communities and nations, our relationship with God—or lack of one—are constant sources of emotional pain, sometimes revealing itself as an annoying prod, sometimes manifesting as a force so destructive that it hastens death.

While not without biblical precedent, the ancient story of Job and the striking down of King David's infant son (2 Sam. 12:15) come first to mind. God doesn't directly and deliberately set into motion those things that cause our emotional pain. Try as we might to dismiss the reality, there are natural consequences of a fallen world where our free will is often poorly exercised. And yes, I mean that sinful choices can ultimately result in pain, as unpopular a notion as that may be. But if sin is defined as a "missing of the mark," then it's really just a failure to meet God's perfect standards of love and justice and mercy. If I refuse to "forgive those who trespass against" me, or if I fail to "love my neighbor as myself," those simple acts of commission and omission, despite Christ's unambiguous commands, are powerful reminders that God's perfection is not the norm in my life. My unkind word, my stubborn grudge, my spiteful gesture, my violent act in retribution—all serve to escalate my battle with my neighbor and all end in self-destruction. We aren't suffering because of a callous and vengeful God. Rather, we are in pain because, much like little children, we often make deliberate choices that cause us to become less and less like him. We choose separateness. We reject the path toward holiness.

But if God doesn't cause our pain, he can find ways to use it. I have no patience for those who, in the face of someone else's suffering, rattle off how "This is for the best" or "It's God's will." No! They perpetuate the lie that God is either the cause of our pain or doesn't care about our suffering. But that's not to say that, once we are in that place of hurt, God won't shout at us, or that he won't try to get our attention, or that he won't try to turn it for our good.

Pastor Rick Warren recently lost a son to suicide. Sitting for a TV interview, he revealed how he and his wife had dreaded but half expected that news practically since their son's birth. They had sought the best mental healthcare. They prayed for him. They loved him. The night he killed himself, the Warrens had had dinner with him. And yet, just hours later their son was gone. A man of God who had counseled and comforted countless other parents forced to bury a child found himself in the same place and in need of God's help, comfort, and mercy. Is there any greater pain than the loss of a child—except maybe the pain of losing that child by his own hand? But Warren's story doesn't end there. He has now partnered with California Catholic Bishop Kevin Vann to launch a new mental health ministry and has declared, "I'm certainly not going to waste this pain. One of the things I believe is that God never wastes a hurt and that oftentimes your greatest ministry comes out of your deepest pain."

Our emotional despair over the loss of a loved one may spur us to listen for that inner voice that hungers for restoration, a connectedness to our community, and our complete integration into humanity. That professional failure or a friend's sudden rejection may cause us to let go of ego, self-absorption, and the many hidden, ulterior motives that normally propel us forward. Perhaps only then will we be enticed to seek a new level of acceptance, understanding, forgiveness, openness, and a more child-like reliance upon the love given freely of the Spirit. That devastating financial loss? Maybe it will finally awaken us to a virtuous dependence, a total surrender to the One who has given us everything, the One who, in fact, has given us his all.

The next time that emotional pain overtakes us, the next time that we stand at the precipice, let's deliberately take a step back. Let's turn our gaze away from the mirror and seek that voice shouting "Behold I am doing a new thing, do you not see it?" Rather than trying to find our satisfaction in the pity that we can evoke, as Henri Nouwen succinctly put it in The Inner Voice of Love, let's try, finally, to break free.

Our pain may well persist—there are no promises, after all, that even our most sincere prayers will be answered in the ways we desire—but maybe, just maybe, we can see something new and different beyond that pain...something, perhaps, that will guide us to a more perfect and sure path home. 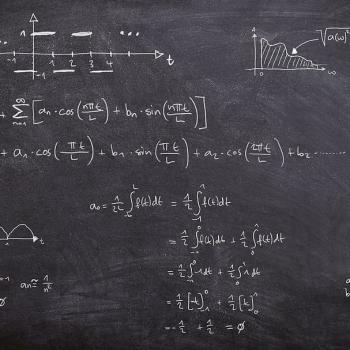 Population Explosions and Religious Revolutions: The Case of Latin America
Philip Jenkins
Get Patheos Newsletters
Get the latest from Patheos by signing up for our newsletters. Try our 3 most popular, or select from our huge collection of unique and thought-provoking newsletters.
From time to time you will also receive Special Offers from our partners that help us make this content free for you. You can opt out of these offers at any time.
see our full list of newsletters
Editor's picks See all columnists