The Bible Tells Me So: A Southern Gent Wows Catholic Kids with the Bible

About 25% of the children in each of his classes are Hispanic. "They speak English better than I do, but they're shy," he says. So he finds ways of drawing them in and affirming them by asking questions no English speaker can answer.

"Spanish kids make a contribution to class that is very important. I tell the kids that Spanish is one of Latin's beautiful daughters. The Spanish names for things almost never have the same exact meaning of the English word. When I use the Spanish child as a resource, it's good for them to see they knew something the other students didn't know. It's important for the English speakers to realize that Catholicism is Catholicism all around the world, for over 2,000 years, not just in Greenville, speaking English."

"How do you say, 'Christmas' in Spanish?" he asks everyone.

"What does it mean?"

From there the discussion covers birth and babies, the helplessness of the infant, and God's extraordinary humility.

To emphasize God's fatherly love and the tenderness of Jesus' condescension in becoming an infant, he brings a small child's chair into class and describes the way he used to squeeze his huge adult body into a very tiny seat in order to sit for ten minutes at a time and play Tea Party with his young daughter. The children are "just roaring."

"Because you love her," they all respond immediately.

"They know. They know the answer without thinking," he says. And the point is indelibly made.

"You can let the Bible teach them. A lot of times the Bible is not didactic. It just tells the story and it's only from reflecting, pondering, re-reading, and thinking about it and your own life that you come to understand it. For instance, I know the Ten Commandments are written to be simple, and even children can read and absorb and profit from them. The drama and pleasure of a story or solving a puzzle is gratifying for everyone, but especially for kids. I only give them enough information so they can figure it out for themselves."

Christian's new book, The Bible Tells Me So: A Year of Catechizing Directly from Scripture, is a wonder, and must not be missed by any catechist or any Catholic adult whose faith could use a stronger foundation. Readable, entertaining, and thorough, you'll experience it as though you were a part of his classroom, learning and laughing along with the children.
With its in-the-moment style and interactive approach, it's almost like reading a great film script. But so much richer. As the modest preface tells you, the book recounts a full year of Bible-based teaching, "...featuring both Bible-sourced Catechesis and the give-and-take between teacher and students."

As a guide for how and what to teach, it's invaluable. The 37 chapters have delightful names such as, "Adam's Nose," "Smarter than God," "Miraculous Mothers," and "Sing along with Kind David," and include photos of some of Christian's many whiteboard drawings. Some classic art reproductions are also included.

In a savvy and fascinating afterword, the author gives nuts-and-bolts teaching tips, like "The catechist drives the class..." and "Kids love to go sideways..." that help you make the most of your own classroom experiences.

An image appendix includes diagrams of Moses' Meeting Tent, Solomon's Temple, Christ's Church, and then compares them, calling them "the middle ground between earth and heaven."

To say that this program is beautiful doesn't do it justice. To say that Christian LeBlanc is someone sorely needed in the Church is a major understatement. 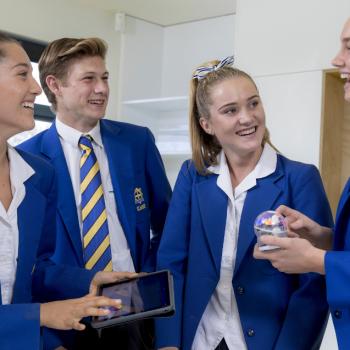 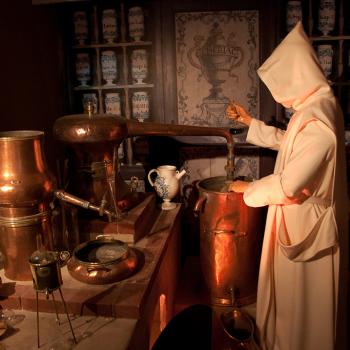 Monks Monastic Mysterious Beverage: Last Week In Life: August 16, 2021- August...
Mark Wilson
Get Patheos Newsletters
Get the latest from Patheos by signing up for our newsletters. Try our 3 most popular, or select from our huge collection of unique and thought-provoking newsletters.
From time to time you will also receive Special Offers from our partners that help us make this content free for you. You can opt out of these offers at any time.
see our full list of newsletters
Editor's picks See all columnists