A "Very Safe Place" for Music

Sherri Anderson's mission is to bring music to everyone. She spends her life providing opportunities for children and teens of disparate backgrounds—kids who live in boarding schools or who live in homeless shelters—to make music.

"Sherri sees harmonies that to most of us are hidden," says Professor Jim Wetzel, who holds the St. Augustine Chair at Villanova University, where Anderson recently earned a master's degree in theology. "She is a professional musician and is peculiarly gifted in using music as a way of healing. For her, it's a grace."

In 1997, Anderson founded the Stretto Youth Chamber Orchestra of Greater Princeton, whose players' home lives are extraordinarily varied. In 2002, Anderson expanded her mission, founding the Blue Mountain Chamber Music Festival, in Trenton, New Jersey. The camp gathers children—many of them with limited resources and poor access to high-quality musical instruction—and offers them classes in music theory, chamber ensembles, orchestra, ear training, and movement. The festival also has a residential component: for two weeks the students train with world-class musicians while using the facilities at Franklin and Marshall College in Lancaster, Pennsylvania. No child is turned away because of an inability to pay.

"My deepest sense of her is that she senses a dynamic loving order in the universe where most of us see nothing, or see chaos, " says Wetzel, an advisor on her recent master's thesis, "Rhythmic Attunement: Augustine's Theory on Ordering the Soul."

Her childhood faith experiences influenced Anderson's career path. "My faith experience was always based in communities where there was more than your average amount of need . . . so . . . poverty. Alongside the middle class there was the reality of poverty, the lack of resources, the mental-health issues, the unstable homes. That was never a reality I didn't know. I knew that that was a place where I was going to work."

During her childhood, Anderson attended nondenominational Christian schools in Delaware and Pennsylvania. She says her worldview was strongly shaped in her father's church, Snyder Avenue Congregational Church in South Philadelphia. The church has always been multiracial and Sherri grew up watching congregants struggle to put food on their tables. So did Anderson's family, sometimes. "There was a two-year stint where we didn't have a stove and ate out of the microwave," she says. "We ate from the garden in the summers." Often, her family would host families or individuals who needed a place to live temporarily. And, she says, her parents always figured out a way to offer educational opportunities to their children. 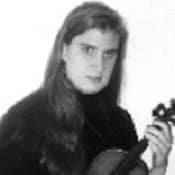 Sherri was the lone daughter in a family of five children. Her father's job as pastor offered a housing allowance but no salary; he worked as a public school teacher in Wilmington, Delaware to pay bills. She began taking violin lessons at age seven. When she was ten, her parents told her the lessons would have to stop because they could not afford them. "[Her beloved violin teacher, Estella Frankel] actually taught me for free for a year. Otherwise I actually might not have kept playing." Ms. Frankel died at age ninety-eight.

In addition to offering her free lessons for a year, Ms. Frankel hired Anderson to do odd jobs, such as raking leaves on her property. Later, she had her babysit her grandchildren and eventually, she had her help teaching violin. Believing that music should be for everyone, regardless of background, and acknowledging that she always had "an inkling" that she wanted to teach, Anderson earned her undergraduate degree in music from Wheaton College in 1995, and began the Stretto Orchestra the same year she completed her Master's in Sacred Music from Westminster Choir College.

One of Stretto's newest members is Emma Method, a high school freshman from South Jersey. At her high school, Emma is the lone violist. In Stretto, she is the lead violist. "Because it's smaller, Sherri can work more closely with every person and develop their skills. It gives you the opportunity to understand how to play with other people and to listen to them," Emma said. "I have learned a lot how to bring out the musicality in the music, to understand more than the notes. She talks about music in terms of pictures and shapes. "