A great deal of spirituality, in manifestations across all stripes of religion, either implicitly or explicitly bases itself on the concept of the "true identity" of the practitioner. Either a system knows what one's true identity is and tries to purge away anything that isn't that true identity (which can occur in both positive and negative ways: the "born sinner" of Christianity or the "possessor of Buddha nature" of Buddhism), or it offers a way to find one's true identity past all labels and characteristics.

Other possibilities exist as well, of course, but these are some of the most popular manifestations of this variety of spiritual philosophy. While there is more of an emphasis on this in some forms of spirituality that are heavily invested in personal development, including a great deal of what is called "new age" thought and discussion, there is an element of this in a great deal of modern Paganism as well.

Any number of things I've been involved with over the years in spiritual practice and theorizing has been based in this type of philosophical project: some have been very useful and interesting and productive, while others have been quite useless and, in some cases, even potentially harmful. Nearly anything that involves identity politics of any sort—including distinguishing ourselves as modern Pagans (of whatever stripe) who are both religious adherents and spiritual practitioners quite independent of the negative characterization we've been given by other religions—has some stake in these types of philosophical projects. If, at any point, you've asked yourself, whether in your own personal reflections or in spiritual exercises, meditations or in ritual challenges (or any of myriad other contexts), "Who am I?" then you've done this type of work before.

One system of this kind of work, which has been especially useful for me (despite the critiques of it which some have presented—many of which are quite valid), is the Enneagram. The most fundamental summary of the Enneagram's perspective on personality is that every person falls into one of nine personality types that simultaneously reflects the "false self" that they've created and adapted to meet their particular challenges in the world, but also their "true self" that has the clues to their greatest virtues and the keys of their most deep identities, and which is also the way the gods manifest through the individual person and to that individual person.

Working with this system has been transformative for me, not only in my own approach to understanding the quirks of my own personality, but also to dealing with others and their own particularities. It's not infallible, by any means, but it has been very effective in my own experience and employment of the system thus far.

Because one of the cornerstones of the Enneagram system is that the "false self" gives a clue toward the "true self," I think it can be equally said that the "true self" gives birth to the "false self" as a kind of armor for it. As a result, the entire notion of one part of oneself being "true" and another part being "false" is highly problematized, since the root of the one is in the other, and the fruits of the one are manifested in the other. No matter how much one may like one part of oneself, and how much one may detest another part, they're all parts of onself, and therefore no more true nor false than any other part. I'm as much myself when I'm feeling lousy in the presence of my family and their long-standing issues and dramas as I am when I've just given an excellent workshop that everyone enjoys, and I'm as much myself as when I'm standing in the presence of my gods and am being filled with their inspiration and ecstasy as I am when my body isn't working right, everything hurts, and all I can imagine is crawling back into bed for another few hours' sleep.

And yet, independent of these concerns, I think there are certain roles that some of us tend to play that are more suited to us than others. These often take time to determine or to locate, and even if it is something that we are (as is sometimes said) "born to do," such activities don't always simply come naturally and quickly—they take just as much time, practice, and devotion to develop properly and usefully as any other possible skill or activity in life. Without the proper opportunities to develop these skills and to be tested in the particular crucibles of each role's alchemical processes, true greatness cannot come about.

It's funny, because sometimes these roles are so obvious and apparent, and yet they are not, or are not entirely appreciated or enacted or inhabited. I'm having that experience currently, and thus I'd like to share my frustration as well as my revelation ("frustelation"?) with you here.

From the earliest times in my devotion to Antinous, I've been known as the Doctor in the groups where I have practiced. While I did, in fact, later earn a Ph.D. at an academic institution several years after beginning Antinoan devotion, and thus am called "Dr." anyway, in the spiritual context I found this title to be important and characteristic of my own approaches and role. I have been involved in teaching, in some form or another, since I was about seven years old, when I began to teach my younger brothers and sisters as toddlers how to talk, read, and do other things. As time went on, the question didn't become whether or not I'd be a teacher of some sort, but only what I'd end up teaching. To bring these particular skills and to play that particular role, therefore, for Antinous seemed like a true "vocation" and an excellent way to serve this deity.

Progressives Canceling Each Other
Gene Veith
2 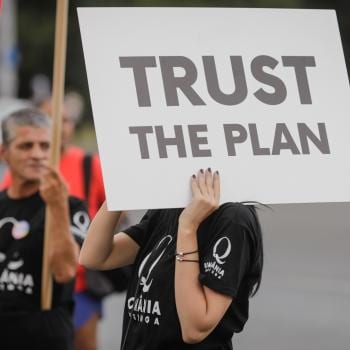 The similarities between QAnon and evangelism
Freedom From Religion Foundation
4

Falwell Jr unzipped: evangelical leader says it was 'just in good fun'
Barry Duke
Get Patheos Newsletters
Get the latest from Patheos by signing up for our newsletters. Try our 3 most popular, or select from our huge collection of unique and thought-provoking newsletters.
From time to time you will also receive Special Offers from our partners that help us make this content free for you. You can opt out of these offers at any time.
see our full list of newsletters
Editor's picks See all columnists