She lives on disability assistance and can't afford to attend the convention, though she desperately wants to.

I'm writing these words on the anniversary of Trayvon Martin's murder. Alan Blueford, Gary King, Sean Bell, Oscar Grant, and many others are also dead. Gwen Araujo, Angie Zapata, Matthew Shephard, and Brandy Martell were also murdered. They are dead because of fear and hatred, and they are dead partially because we are blind to our privilege. The cost of maintaining privilege is that it creates systems of fear, distrust, power imbalance, xenophobia, and isolation. Any of these can quickly lead to persecution, harassment, oppression, injustice, and even death.

Why do I mention this in the context of a panel at a convention in a cushy hotel? The cost of privilege doesn't always raise its head in such dramatic and hateful ways, but the two are connected in the culture at large. There are women, men, and children who are excluded from our rituals, gatherings, and conversations not out of malice, but because we just don't notice there isn't a place set for them at the table. We didn't think to look. That not thinking to listen or look is what helps give rise to the more heinous violations of body, mind, and spirit that occur every day. Exclusion—even the unconscious kind—gives rise to xenophobia because "the Other" has been created. Xenophobia, as we know, gives rise to all sorts of harm, small and large.

I was at PantheaCon and literally saw only three other black people both days I was there.*

To paraphrase priestess Crystal Blanton, we forget that, though we may be oppressed in one way, we are also the oppressors. We are complicit in a society that thrives on inequity. Unless we talk about privilege and how we are affected by it, and how we affect others by it, we will not be able to heal these wounds. We will, instead, keep making fresh cuts. Saying we are "colorblind" or "get along with everyone" or "love women!" or "love my gay friends!" doesn't mean we don't need to examine our privilege, and hear the ways in which we are still excluding people unconsciously, or upholding systems that oppress.

There is so much more to write, to think about, to do, to say and to not say. It is my wish that we continue these conversations in the coming years. Let's make this a long game, one in which we learn from each other, argue, listen, allow things to gestate and take action.

I give thanks to the Covenant of the Goddess, Temple of Wicca, and New Reformed Orthodox Order of the Golden Dawn suite and the People of Color Caucus suite for hosting this discussion at PantheaCon. I also give thanks to my panelists: Crystal Blanton, Elena Rose, Xochiquetzal Duti Odinsdottir, and River Higginbotham, and to everyone who participated in the discussion. You fill my heart with joy. I honor you.

* Christopher Bradford wrote this in 2011: http://heavenswithinearth.blogspot.com/2011/11/im-pagan.html

Here are some more links of interest:

Audio from this panel will be available on Elemental Castings sometime in March 2013.

Why Zen? A Small Meditation on the Smallest of Things
James Ford
3 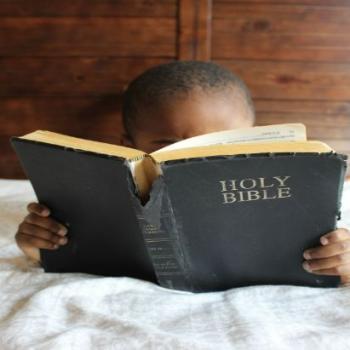 How to Make a Bible Lesson More Interesting for Young Children
Oscar Collins
Get Patheos Newsletters
Get the latest from Patheos by signing up for our newsletters. Try our 3 most popular, or select from our huge collection of unique and thought-provoking newsletters.
From time to time you will also receive Special Offers from our partners that help us make this content free for you. You can opt out of these offers at any time.
see our full list of newsletters
Editor's picks See all columnists