It's been a while since I've written this column, and I'm glad to be writing the present one after several momentous occasions of the past few weeks. I've had time to think on them, and have read a variety of responses to these events, and I hope that my comments here end up being a useful addition to a discussion that will be ongoing for some time to come.

On June 26, 2013, the Supreme Court of the United States made decisions on the Clinton-era Defense of Marriage Act, and the more recent California Proposition 8 decision. In effect, their decisions on these matters have re-instated same-sex marriage in the state of California, and have repealed DOMA so that a same-sex marriage that is valid in one state can be considered valid in another. As advocates on the winning side of this decision have been saying for the past few years, opponents of these advances are on the wrong side of history, and thus, for the moment, they have proven to be correct.

I've seen a variety of responses to this issue over the past week, from the realistic and pragmatic, to the in-depth and legally accurate, to the adorable. These are three of the four commentaries on the matter that I've enjoyed the most thus far, and I suggest everyone take a look at them; note, though, that only one of them is polytheist-specific.

The day after the above decisions, June 27, however, was the 44th anniversary of the Stonewall Riots in New York City, and during that final week of the month of June, many Gay Pride—or, sometimes, LGBT Pride—events took place across the country and around the globe. They were especially joyous this year in the U.S. as a result of those Supreme Court decisions. I have not taken part in a Pride event since about 2003, when I lived in Ireland. It is usually because I have simply not been in the position to do so; but increasingly over the last few years, I have not had as much interest in doing so, because the queerness that I live as part of my daily life is not the same sort of queerness that is celebrated, or even fully recognized and integrated, at these sorts of events. There are large and complex reasons for that, which I won't go into for the moment.

But this brings me to the fourth response to the Supreme Court decisions that I have enjoyed, which is by a prominent Pagan, T. Thorn Coyle. (Imagine that?!? One Pagan expressing admiration for something T. Thorn Coyle has written . . . how not-remotely-queer-within-a-Pagan-context is that?) As someone who has done an awful lot of work in the trenches, often rather literally, on matters of social justice, Thorn's observations on these matters are extremely poignant, and reflect a variety of viewpoints that I hold myself. It is a horrible irony that John Lewis's graphic novel, March (Book One)—on one of the most violent conflicts during the Civil Rights movement in 1965, a little less than five months before the historic Voting Rights Act of 1965 was signed into law—will be available for purchase in August of this year, a little more than a month after that important law has been rolled back. Thus one of the most important legislative results of the Civil Rights movement becomes a memory, even though the need for its protections is still as dire today as it was in the 1960s.

Bayard Rustin—an important African-American political activist, a gay man, and a Sanctus of the Ekklesía Antínoou—was involved in the Civil Rights movement alongside the Rev. Dr. Martin Luther King, Jr. In fact, it was Rustin's admiration for Gandhi that in turn influenced the Rev. Dr. MLK Jr. to take Gandhi as an inspiration for non-violent resistance. Unfortunately, it was Rustin's homosexuality that caused the esteemed King to distance himself from Rustin, and thus make him less prominent a name than MLK and many other individuals in modern mainstream understandings of the Civil Rights movement. In a speech in 1986, just a year before his death, Rustin said:

Today, blacks are no longer the litmus paper or the barometer of social change. Blacks are in every segment of society and there are laws that help to protect them from racial discrimination. The new "n***ers" are gays. . . . It is in this sense that gay people are the new barometer for social change. . . . The question of social change should be framed with the most vulnerable group in mind: gay people.

Prince George was born today: The privilege and responsibility of your royal...
Alyxander Folmer
2 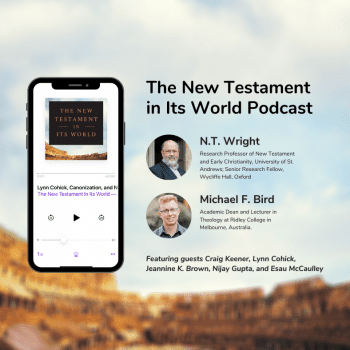 Introducing the New Testament in its World Podcast
Mike Bird
3 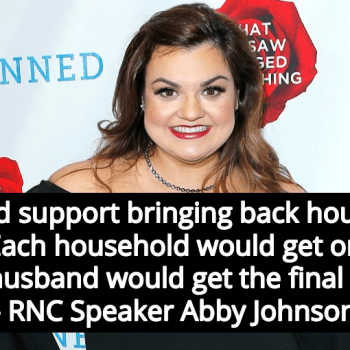 Time for a Woman in the White House?
Ben Witherington
Get Patheos Newsletters
Get the latest from Patheos by signing up for our newsletters. Try our 3 most popular, or select from our huge collection of unique and thought-provoking newsletters.
From time to time you will also receive Special Offers from our partners that help us make this content free for you. You can opt out of these offers at any time.
see our full list of newsletters
Editor's picks See all columnists