The Spotlight Team: About the Cast

Spotlight is now featured in the Patheos Movie Club. Visit the Spotlight Main Page for more commentary, and join the conversation!

Spotlight boss Walter "Robby" Robinson is portrayed in the film by Michael Keaton, who was nominated for an Oscar® for his lead performance in 2014's Birdman: Or, The Unexpected Virtue of Ignorance. The actor, who grew up in a devout Catholic family, channeled the behavioral tics of his role model with unnerving accuracy, according to Robinson. "The first scene I saw was a shot with Michael Keaton, and I almost fell off my chair because he did a perfect me," says the acclaimed investigative journalist. "Not just my voice and my semi-pseudo Boston accent but my facial expressions, my gestures. He had it all down."

McCarthy says he pictured Keaton in the role in part because of the actor's persuasive portrayal of a harried city desk editor in Ron Howard's 1994 newspaper drama The Paper. "Interestingly enough, The Paper is also one of Robby Robinson's favorite movies. Like Robby, Michael's tough, gentle, wickedly funny and winsome—and he brings all of that to his role of this player-coach who guides the investigation."

Working under Robinson's direction is star reporter Mike Rezendes, played by Mark Ruffalo. The actor, who was nominated for an Oscar® for his portrayal of wrestler David Schultz in 2014's Foxcatcher, received the Spotlight script from director McCarthy on a Friday, read it that night and agreed to take the part the following day. "I immediately felt that this would be an important movie," recalls Ruffalo. "There are movies you do for 'them' and some, like Spotlight, that you do for yourself. All these poor souls are walking around out there who've really been wounded in a brutal and hurtful way by an institution that should know better."

Ruffalo shadowed Rezendes for weeks to shape his interpretation of the tenacious reporter. "The first day I met Mike, he was a bit guarded, not surprisingly; here comes this actor, what's he gonna do? We went to his apartment, then we had dinner and went for a long walk. We talked and talked and I started to get a sense of who he was through all this back and forth. Then I went to the Globe and spent five days with Mike before we started rehearsal. Once we started shooting the movie, he showed up on set quite a bit. To have him watching me work was a little unnerving because I really want to do him right."

As he got to know Rezendes, Ruffalo discovered that he and his real-life counterpart had a lot in common. "Mike and I are both outsiders," Ruffalo observes. "We come from a world that really didn't give us entrée into the jobs we wanted. We were rebellious, and we were both raised Catholic. Mike and I left the Church because we saw inconsistencies between the teachings and the actual manifestations in the public world."

The first actor to sign on to Spotlight, Ruffalo brought characteristic depth to his performance. "Almost more than any other actor working today, Mark is coming from a unique place of being able to physically transform from character to character," observes McCarthy. "He combines that with emotional work, so it was very exciting to see Mark take on the Mike Rezendes character in subtle ways, without ever being bombastic or showy."

Where Ruffalo's character focuses on legal aspects of the investigation, Rachel McAdams' Sacha Pfeiffer specializes in interviewing the victims of clergy sex abuse. "Sacha's a smart cookie," says McAdams, recently lauded for her gritty turn on HBO's "True Detective," following crowd- pleasing performances in Sherlock Holmes and The Notebook, among others. "She and I started communicating through email, then graduated to the phone and finally I took the train from New York to Boston one weekend and spent the afternoon with her and her husband," the actress recalls.

The marathon interview paid off. "I asked Sacha every question I could think of," she says. "Even the tiniest things: 'Would you wear a watch?' Whatever it was, she'd tell me anything I wanted to know."

McAdams's conversations with Pfeiffer informed some of the film's most moving sequences, as the reporter gently encourages abuse survivors to tell their stories. "I was so impressed with how Sacha honored these victims," McAdams says. "The way she put it to me was like 'For so many years, they had to put this trauma aside, never talked about what happened or even had it acknowledged. And here I am cold-calling them in the middle of their day out of the blue and asking them to talk about this abuse and turning their world upside-down.' Sacha told me she didn't feel it would be right to just do the interview, walk away, exploit that pain and disappear as quickly as she arrived. So to this day, she's maintained relationships with a lot of the victims long after their stories were published." 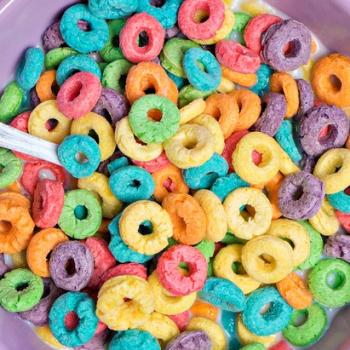 5 Great Christian Cereal Ideas
Chris Williams
Get Patheos Newsletters
Get the latest from Patheos by signing up for our newsletters. Try our 3 most popular, or select from our huge collection of unique and thought-provoking newsletters.
From time to time you will also receive Special Offers from our partners that help us make this content free for you. You can opt out of these offers at any time.
see our full list of newsletters
Editor's picks See all columnists