The Gift of Faith in "Unbroken": An Interview with Luke Zamperini

This Christmas, the highly anticipated movie about Olympian and war hero Louis "Louie" Zamperini opens in theaters nationwide. Unbroken, directed and produced by Academy Award® winner Angelina Jolie and based on the #1 New York Times best-selling book by Laura Hillenbrand, tells the extraordinary story of Zamperini who, along with two other crewman, survived in a raft for forty-seven days after a near-fatal plane crash in WWII — only to be caught by the Japanese navy and sent to a prisoner-of-war camp. (For more on Unbroken, visit the Patheos Movie Club here.)

While the epic movie resounds with the themes of hope, resilience, and redemption, Zamperini's life after the war was infused with grace and it offers us a real-life Christmas story of light in the darkness. When he eventually returns home from Japan, Zamperini enters a new kind of darkness, struggling with Post Traumatic Stress Disorder. After several years of nightmares, drinking, fighting, and nearly losing his marriage and family in the process, Zamperini literally fell on his knees one afternoon and became a Christian. And while that aspect of his life is not a huge part of the movie, it does play a significant role in the story's ending and overall message of forgiveness. And that, I learned from his son Luke, was very important to the 97-year-old Zamperini, who just passed away this year, and his family.

I spoke with Louis' son, Luke Zamperini, about the movie — and the incredible man who inspired it — this week.

What's it like seeing your dad's life story on the big screen? Does it capture him? Does it tell your dad's story?

It does. It's very exciting for me, and my entire family, to see this film. I grew up being aware of my Dad's story — these were my bedtime stories growing up. I've read his autobiography, and of course the book, Unbroken. I've listened to my father speak hundreds of times in various churches and community groups where he would tell his story. We're just thrilled to see this on the big screen. And Jack O'Connell (the actor) has really captured my dad. It's just a thrill to watch the film.

Did Jack O'Connell get to spend time with your dad during the filming of the movie?

Yes, he did. All the main actors were brought over to the house and met my dad. He would tell them about the characters they were playing and the character traits of the guys on the raft with him, and the guys in the prisoner camps. You could tell that impacted each of the actors. It's a fantastic movie. It's superbly shot, and it's got a mesmerizing soundtrack. It's this beautifully told story of grim proportions. It's just a beautiful film.

I've not seen the film yet, but I've been reading your dad's last book, co-authored by David Rensin, called "Don't Give Up, Don't Give In." It's filled with so many inspiring words and stories from your dad. He sounds like he was an amazing man until the very end of life.

He was an amazing guy. Going through what he went through, it's just amazing when you meet him, because he's the most happy, joyful, life-loving person I've ever known. He has a great sense of humor. Forgive me if I speak about him in present tense; he's still with me in my heart and my mind although I lost him five months ago. His latest book Don't Give Up, Don't Give In … these are his last words to the generations that are following him. I've read it a couple of times and I love it. 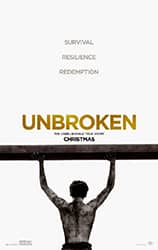 It's not part of the movie, but your dad had a life-changing conversion experience some years after returning from the war. Can you comment on that and how it informed his life from that point on?

Absolutely. What my dad went through in WWII was very, very hard on him and he came home with what we know today to be Post-Traumatic Stress Disorder (PTSD). He was unable to shake the effects of the prison camp life. Every night he would have these incredibly vivid nightmares about being attacked by his most cruel guard, nicknamed the Bird. And he would always be trying to kill the Bird in his dreams as well. This went on for about four years after the war. He had gotten married and the marriage was falling apart because he was so out of control and spiraling downhill with alcoholism and getting into fist fights at the drop of a hat.

Then one day my mom wandered into this revival meeting in downtown Los Angeles with an evangelist named Billy Graham. She came home with this new joy in her heart and she explained this to my father and got him to go the next day. He went and he got angry and stormed out … yet she got him to go back a second time. And while he was hearing this message and getting ready to leave again, he started thinking about all the promises he had made God on the life raft and in the prison camp — that if God would get him home from the war, he would seek him and serve him. And he realized he'd been a heel, because he hadn't taken care of his part of the bargain although God had taken care of his part.