Listening to the partisan back-and-forth of American political discourse can turn the most optimistic citizen sour. But contrary to our assumption that these conversations only divide us, Stephen Prothero asserts in The American Bible: How Our Words Unite, Divide, and Define a Nation that these tiffs are the shared fabric of our country that define and differentiate us.

Prothero, a professor of religion at Boston University and contributor to CNN's Belief Blog, has compiled some of America's most beloved and controversial speeches, songs, letters, and documents—from the "Declaration of Independence" to Uncle Tom's Cabin—and interspersed snippets of commentary from some of America's most colorful characters—everyone from Ben Franklin to Sarah Palin—into an accessible compendium.

Prothero asserts that the chronic, American obsession with disagreement is neither new nor inherently bad. In fact, it may be what makes the United States great and keeps its democracy vibrant. Through this book, Prothero invites the reader to listen to three and a half centuries worth of conflict and emulate the spirit and civility of past generations.

We asked Prothero a few questions about the purpose and timing of his compilation.

Religious literacy seems to be a common theme of much of your recent work. How does this book, which is an anthology of primarily "secular" documents, play into that?

Ever since I concentrated on religion and politics in my American Studies major in college, I have been preoccupied with both sacred and secular things. Most of my prior books put religion first. This one is more political, but there is still plenty of religion in it.

In Religious Literacy I observed that, while the American people are extraordinarily religious, they know very little about their own religions and even less about the religions of others. In The American Bible, I try to reconnect the chain of memory between Americans and the core texts of our public life, focusing in this case not on Matthew, Mark, Luke, and John but on Washington, Jefferson, Lincoln, and King.

These core texts are not my only concern, so this really isn't an anthology. I include alongside the "Gettysburg Address" and "I Have a Dream" commentaries on these speeches by later Americans. These commentaries are as much a part of The American Bible as the core texts themselves.

You've given this book a familiar shape by organizing it into familiar biblical sections, such as Prophets, Proverbs, and Gospels. Did you consider including an Apocalypse?

Not really, but perhaps I should have. This might have taken me more squarely into popular culture, such as television (War of the Worlds?) and film (The Terminator?).

But as I worked on the Table of Contents for this book I tried to follow two criteria. First, I looked for biblical "books" with vibrant "afterlives"—texts that stirred up commentary and controversy. Second, I looked for voices that explicitly explored the meanings of "America" and "Americans": Where have we been? Where are we going?

With these two criteria in mind, I gravitated toward Adventures of Huckleberry Finn and Uncle Tom's Cabin rather than The Planet of the Apes.

I mean that the United States is more a Jewish than a Christian nation.

Because Christianity runs so deep in the American psyche, it seems natural for us to seek after some sort of creed that might function for us like the Nicene Creed does in the Christian tradition. And Americans do tend to gravitate toward key words such as liberty and equality, democracy, and capitalism. Yet, we disagree fiercely about what those words mean and about how to prioritize them.

This may sound rather grim for those of us who are worried about the nation spinning out of control. But we do share certain core texts—from the Exodus story to the "Declaration of Independence" to "Washington's Farewell Address"—and an ongoing argument about what these classics mean. Ironically, this argument brings us together, just as arguments about Hebrew scripture bring together rabbis in the Talmud.

Is this unique? Probably not. The American Bible isn't a comparative project, and I really haven't studied how the holy writ of public life works in other countries. But I suspect that the notion that we are a "people of the book" runs deeper here than in many other countries. Here we engrave the words of Lincoln and Jefferson into their memorials in Washington, D.C., and the names of the dead into the Vietnam Veterans Memorial. These are the words that unite, divide, and define us. 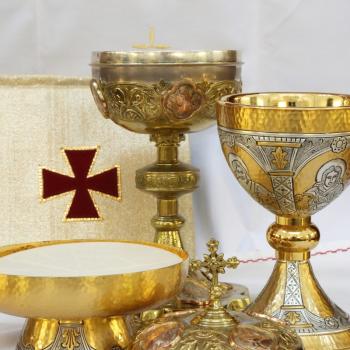 The Eucharist Is Not A Magical Talisman. Its Purpose Is Communion
Henry Karlson
2 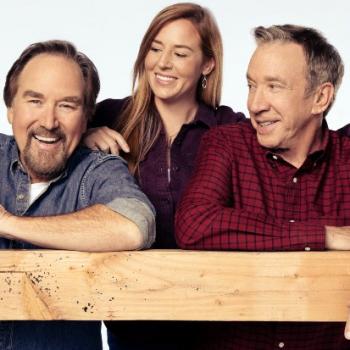 An Open Letter from an Immigrant's Wife
Guest Contributor
Get Patheos Newsletters
Get the latest from Patheos by signing up for our newsletters. Try our 3 most popular, or select from our huge collection of unique and thought-provoking newsletters.
From time to time you will also receive Special Offers from our partners that help us make this content free for you. You can opt out of these offers at any time.
see our full list of newsletters
Editor's picks See all columnists