The New Evangelical Manifesto: A Kingdom Vision of the Common Good, Part 2

In Evangelicalism, you see a lot of nostalgia for the 1950s—or an idealized version of it, when America saw itself in a life and death battle with Communism, when women stayed home and dad went to work and nobody got divorced, when respectable folks went to church every Sunday, and when White folks felt themselves to be normal and normative and White privilege could be taken for granted. In mainline settings, there's lots of nostalgia for the same period, but there's also nostalgia for the 1960s when progressive Protestant leaders decided Dr. King was right and the Vietnam War was wrong and they had a passionate sense of moral conviction and a vision for justice. In Catholic settings, you can feel this desire to return to the pre-Vatican II era, to return in the liturgy to obsolescent language that has that old-time, classic feel. But it's not the 1950s or '60s anymore, and there's no going back. It's a little hard to believe that a lot of folks still can't imagine a Christian faith that's even more vibrant as it deals with 21st-century issues . . . like caring responsibly for the planet, like working for and with the poor, like striving to make peace.

You and I have spoken together about our shared fear that the "center" of evangelicalism is becoming itself increasingly radicalized by the Religious Right. In that context I found this comment you wrote particularly striking:

With much to lose by being labeled "liberal" and much to gain by retaining the conservative label, few leaders show the courage to speak out about the stranglehold the nostalgic, nativist, negative wing has on the movement. The only way they can resist extreme voices to their right is to paint voices to their left as equally extreme. They can thus take the posture of being moderates or centrists, but their moderate center becomes smaller and less robust the more it drives away its more progressive voices and defers to its most conservative wing. Because this so-called center can only welcome those deemed acceptable by the right wing, it is in truth neither moderate nor a center.

For me, probably the clearest example of this trend was the firing of Richard Cizik by the National Association of Evangelicals, a story Richard recounts in the book. What do you think of what happened to Richard?

Thousands of pastors and other Evangelical leaders know exactly how Rich felt in that moment where he realized how he answered a question would change the course of his life. In Rich's case, it was about gay people, but it could have been about poor people, or climate change, or torture, or immigration, or taxation. Lots of Evangelical leaders do all they can to avoid those questions, and sometimes they tell people what they want to hear rather than what the leaders really feel. But Rich decided to reveal what was in his heart. He lost his job, but he kept his integrity, and he gained a new freedom. I know something about that from my own experience—times when I held back in fear, and times when I had courage to speak what was in my heart.

Brian, in place of the "three 'Ns'" of nostalgia, nativism, and negativity you suggest "hope, diversity, and creative collaboration." How does your new book, Why Did Jesus, Moses, the Buddha, Mohammed Cross the Road? relate to that alternative vision?

Since September 11, we've seen nativism growing nationwide, and especially among many religious folks. I think many of us are shocked when Christians burn Qurans, plant seeds of suspicion that the President is Muslim or that Muslims are infiltrating the U.S. Government, or claim that—I mean, this is really laughable—Tennessee or Kentucky or Missouri are in danger of being ruled by Sharia law. It's absurd and sad, and also, in a way, utterly predictable because of what we know about human sociology and psychology. Groups are always looking for someone to scapegoat—someone on whom to project their own anxieties and someone against whom they can unite and feel superior.

While the focus of your new book is on relations between different religions, you also have a focus in the chapter for The New Evangelical Manifesto on relations between Christians. You suggest that "new evangelicals" should build partnerships with "mainlineProtestants, Roman Catholics, Eastern Orthodox, members of the historic peace churches, and many ethnic churches" that share similar concerns about the reduction of Christianity to political conservatism. You say that these partnerships could "shift the term 'evangelical' away from its more popular sense—meaning a socially, theologically, and politically conservative demographic—and would reclaim its more historic sense—that is, rooted in the gospel or evangel of Jesus Christ." Who are the Catholics that you think new evangelicals should partner with to help reclaim a focus on the gospel of Jesus? 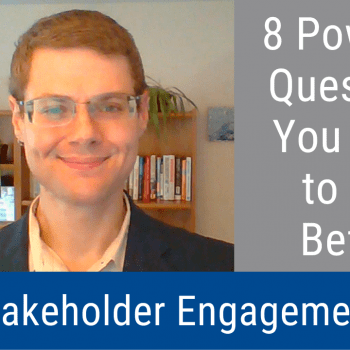 8 Powerful Questions You Need to Ask Before Stakeholder Engagement (Video and...
Gleb Tsipursky
2

The Ego
Pamala Oslie
Get Patheos Newsletters
Get the latest from Patheos by signing up for our newsletters. Try our 3 most popular, or select from our huge collection of unique and thought-provoking newsletters.
From time to time you will also receive Special Offers from our partners that help us make this content free for you. You can opt out of these offers at any time.
see our full list of newsletters
Editor's picks See all columnists