Paul Harvey and the "Eighth Day" of Creation

Something showed up at this year's Super Bowl rarely seen within that context: a sermon. No, I'm not talking about any after-game sideline ten-second testimonies or some new form of Tebowing, but rather an ad that stood out above the rest, if not in style, certainly in substance. The two-minute commercial seemed more of a tribute than an advertisement. The soundtrack was excerpted from a speech that Paul Harvey, the late and beloved radio personality, gave at the 1978 Future Farmers of America convention.

With Harvey's unmistakable oratorical style of dramatic pauses and quirky intonations, the words of this ad targeted an often overlooked but much-needed profession, that of the farmer. In the span of two minutes, viewers were pulled out of the Super Bowl dream and into the rough and real world of farmers and farming. Instead of obsessing over which team would carry the Lombardi Trophy home, we were invited instead to consider some human qualities that matter most in life.

Since the first six days of Creation in Genesis all deal with God creating things that can be seen, perhaps if there really had been an "eighth day" of Creation it would have been devoted to things internal. After all, it does seems that after God made the heavens, the earth, and mankind, he has spent all of time since shining the light on things both internal and eternal, and calling man back to his holiness and wholeness. Harvey's portrait of the Faithful Farmer shone a needed light on similar things.

Amidst an evening of focusing on the externals at the Super Bowl—the play calls and quarters and first downs and half-time shows—Harvey's message struck another note altogether. The tribute focused on some of the finest qualities portrayed in the life of a faithful farmer. Harvey brings out sort of his own Beatitudes of a Faithful Farmer, insights we would do well to reconsider. Here are some of the words from Harvey's tribute and the values they convey in beatitude form:

In other words ... Blessed are the diligent.

PH: "I need somebody with arms strong enough to wrestle a calf and yet gentle enough to deliver his own grandchild; somebody to call hogs, tame cantankerous machinery, come home hungry, have to await lunch until his wife's done feeding visiting ladies, then tell the ladies to be sure and come back real soon, and mean it—so God made a Farmer."

Blessed are those who use their strengths for the good of others.

PH: "God said I need somebody willing to sit up all night with a newborn colt, and watch it die, then dry his eyes and say maybe next year."

Blessed are those who care enough to cry and, then, to try again.

PH: "I need somebody who can shape an axe handle from a persimmon sprout, shoe a horse with a hunk of car tire, who can make a harness out of hay wire, feed sacks, and shoe straps, who at planting time and harvest season will finish his forty hour week by Tuesday noon and then, paining from tractor back, will put in another seventy-two hours—So God made a Farmer."

Blessed are those who possess a strong work ethic.

PH: "God had to have somebody willing to ride the ruts at double speed to get the hay in ahead of the rain, and yet stop in midfield and race to help when he sees first smoke from a neighbor's place—So God made a Farmer."

Blessed are the selfless and sacrificing.

PH: "God said I need somebody strong enough to clear trees and heave bales, yet gentle enough to wean lambs and pigs and tend to pink combed pullets; who will stop his mower for an hour to splint the broken leg of a meadowlark."

Blessed are those strong enough to be kind.

PH: "It had to be somebody who'd plow deep and straight and not cut corners; somebody to seed, weed, feed, breed, and rake and disk and plow and plant and tie the fleece and strain the milk and replenish the self-feeder and a hard week's work with a five-mile drive to church.

Blessed are those who are hungry and thirsty to get things right.

PH: "Somebody who would bale a family together with the soft, strong bonds of sharing; who would laugh and then sigh, and then reply with smiling eyes when his son says he want to spend his life doing what dad does—So God made a Farmer." 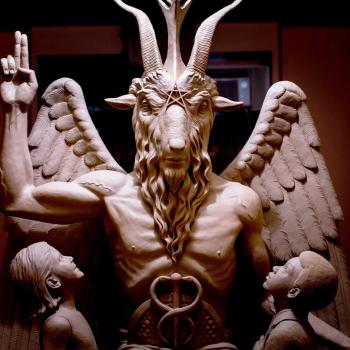 Resurrection #25: NT Writers: Unethical Mythmakers?
Dave Armstrong
Get Patheos Newsletters
Get the latest from Patheos by signing up for our newsletters. Try our 3 most popular, or select from our huge collection of unique and thought-provoking newsletters.
From time to time you will also receive Special Offers from our partners that help us make this content free for you. You can opt out of these offers at any time.
see our full list of newsletters
Editor's picks See all columnists