Post-Election Duties for Christians and Americans

Of course there should be renewed passion for the integrity and life of the Church. But in dire times, a renewed passion for the nation, while certainly subordinate to the Church and its Lord in ultimate loyalty, may also be the providential vocation for many. Eric Metaxas' popular biography of Dietrich Bonhoeffer recalls the German pastor's brief New York sojourn in 1939 when he sought refuge from possible military conscription. He was miserable and abruptly cut short the stay despite the lavish plans for him by his many friends, such as Reinhold Niebuhr. Not only did Bonhoeffer feel intensely called to share in the sufferings of his fellow anti-Nazi Christians back home, he sensed a compelling call to serve his nation by serving within the Resistance.

It's noteworthy that many in Bonhoeffer's family, including his father, were not religious believers, though respectful of religion. Even his devout mother did not often attend church. But they were all deeply, richly committed to Germany, whose moral corruption under Nazism to them was odious. It was Bonhoeffer's non-religious brother-in-law who pulled him more fully into the conspiracy and specifically into service within German military intelligence, headed by Admiral Wilhelm Carnaris, an ardent German patriot and anti-Nazi ultimately hanged along with Bonhoeffer. They shared in the sentiment of fellow anti-Hitler conspirator General Henning von Treschow, who recalled the biblical story of God offering to spare Sodom if Abraham could find only ten righteous men: "He will, I hope, spare Germany, because of what we have done, and not destroy her."

Complicit in Germany's crimes was occupied France, which had surrendered to Hitler so quickly, and most of whose populace initially embraced the collaborationist Vichy regime, whose many disgraces included cooperation with deporting French Jews. When General Charles DeGaulle, a Catholic, returned to liberated Paris, he spoke not of shameful occupied France but of "eternal" France, whose idealized model of civilization transcended the sins of the previous several years and summoned the French to a renewed moral grandeur.

In America, Abraham Lincoln was not dissimilar. When the Kansas-Nebraska Act facilitated slavery's expansion into the West, he left the relative ease and wealth of his law practice for a return to the turmoil and danger of politics. Confronted by hateful passions that exploded into war, during which he accurately speculated that he, as president, could end up a fatality, he never tired of citing his country's highest ideals, as embodied in the Declaration of Independence. A century later, the Rev. Martin Luther King, Jr. likewise would point to the Declaration's transcendent promise, refusing to reject his nation's nobler impulses, even as he faced his own martyrdom.

Few today in America likely face the ultimate plight of a King or a Lincoln, much less a Bonhoeffer. But our times are sufficiently challenging if not stormy. Remarkably, the latest polls declaring the supposedly endless ascendancy of the religiously unaffiliated also confirm that Americans are about as church going as they have ever been for much of the last century.

Forty-two percent of American voters in 2012 professed to attend church weekly or more, almost certainly more than did in Lincoln's day.

And yet our culture, including many of the church going, is increasingly captive to radically secular and morally problematic assumptions about human life and behavior. To confront this encroaching threat to our God-created humanity and God-gifted liberty we certainly need ardently recommitted Christians. But we also urgently need, while not confusing the two, equally recommitted Americans.

What Historians Can Get From Reading American Poetry
Philip Jenkins
2 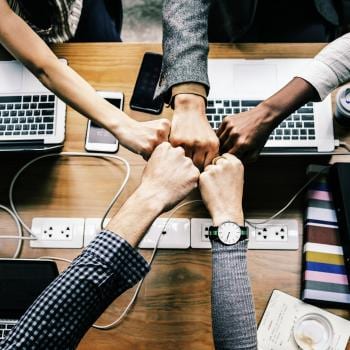 Online Pagan Rituals: We’re Learning As We Go
John Beckett
Get Patheos Newsletters
Get the latest from Patheos by signing up for our newsletters. Try our 3 most popular, or select from our huge collection of unique and thought-provoking newsletters.
From time to time you will also receive Special Offers from our partners that help us make this content free for you. You can opt out of these offers at any time.
see our full list of newsletters
Editor's picks See all columnists