Being Taught after the Manner of the Jews: A Personal Journey

It had been a good session. We had not covered very much of Leviticus, but the discussion had been lively, insightful, and diverse. David decided to chant the first few verses instead of reading them, mesmerizing everyone with his beautiful voice. Andrea read next and reminded us that the word translated as "unclean" in our chumashim actually means "ritually impure." Wallace then expanded upon this idea and explained that the purpose of bringing a leper to the priest was to confirm purity and not to treat illness; Nan, nonetheless, asked about the state of Israelite medicine at the time, and Mark compared it to a United States without the Affordable Care Act. Several hands went up at this point; however, Rabbi Friedman quickly turned the group's attention back to Leviticus, which is where it remained, for the most part, until it was time to go.

"Thanks for coming," Bob said as he held the synagogue door open for me. "I am continually amazed that a Mormon would come to a Torah class."

"Thanks for having me," I responded. "I am continually amazed that you all would allow a Mormon to attend a Torah class." Bob smiled, let me pass, and then quickly caught up with me as I made my way to the parking lot. He seemed to have something on his mind.

"So when are you going to convert?" he asked.

I stopped and looked Bob over. We had talked several times about my project. He knew I was writing a book and that I was attending Torah class so that I could better apply Jewish interpretive techniques to the Book of Mormon. He also he knew I was committed to my LDS faith. I stared at him for several moments, not knowing how to respond. Finally, he cracked a crooked smile and punched me playfully. "Just kidding, Brad. I know you are not here to convert." Relieved, I laughed back and returned his punch. He was right. I was not there to convert, but that did not mean that my experience with this class had not changed me — or affected my Mormonism.

Torah class taught me the value of reading scripture slowly, carefully, one verse at a time. In many ways, Torah class is similar to a typical LDS Gospel Doctrine class. Twenty to twenty-five adults usually attend. Some are converts to Judaism, and some are "lifers." Some seemingly know everything about their heritage and history, and some know very little. Some speak their minds easily, immediately, developing their ideas as they talk, and some are more hesitant, preferring to wait until their ideas are fully formed to say something. Nonetheless, despite these similarities, the rate at which this class studies scripture is radically different. Rather than racing through an entire biblical book in thirty minutes, this class is lucky to cover five or six verses in an hour and a half.

The reason for this slower pace is that the purpose of Torah Study is radically different. In this class, no one expects the text to have a main point, a single fulfillment, or one important lesson that they can take home and apply to their lives on a daily basis. In fact, the idea that there is a single main meaning to a Torah reading, no matter how small, is absolutely foreign to many Jews. To them, the purpose of Torah study is to dive into the text, to feel its words and ideas and images swirl and churn around one, and to have a multifaceted, multi-leveled, multisensory experience with it. As the blessing they recite at the start of each Torah class goes: "Blessed art thou, Lord, our God, Master of the Universe who sanctifies us through his commandments and commands us to immerse ourselves in the words of the Torah.

Such an approach was an adjustment for me. At first it felt more like wallowing than immersing. I wanted the class to move on, to speed up, to get to what I thought were larger, more important matters. However, as I tried it out on the Book of Mormon, concentrating on just one verse at a time, reading it slowly, carefully, just as we read the Torah in Torah class, I began to see its enchantments.

How Has the Pandemic Changed Us? Has It Changed Us Enough?
Rebecca Bratten Weiss
3 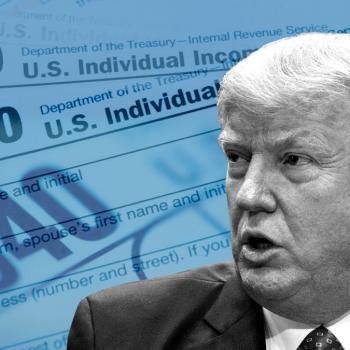 Donald Trump's Weird Tax Deductions
Andrew Hall
Get Patheos Newsletters
Get the latest from Patheos by signing up for our newsletters. Try our 3 most popular, or select from our huge collection of unique and thought-provoking newsletters.
From time to time you will also receive Special Offers from our partners that help us make this content free for you. You can opt out of these offers at any time.
see our full list of newsletters
Editor's picks See all columnists