When students come to the university, their writing skills are seldom good. Even those who are thought of as writing well usually know how to use language fluently but not how to arrange their ideas to make an argument. And even those who have done well in their high school writing classes seldom read well. All but a very few entering students have a difficult time reading a few paragraphs of sustained argument and saying what the author's point is.

But university professors often make too much of this. We forget that we are dealing with young people rather than fully-formed adults. Just as those students matured intellectually while in high school, most change considerably while they are in university. By the time they leave, few are excellent readers or writers (more are the latter than the former), but if we look at their beginning work and compare it to the work they are doing when they leave, the difference is clear.

If we look at the same people ten or twenty years later, we see that they have continued to improve. The skills that we hope come as part of a university education don't come all at once, or even over the course of eight or ten semesters.

That isn't surprising. We expect people to grow and continue to learn over the course of their lives. Students who may have been good but not great writers at graduation may well become very good writers over time. I've seen my children's writing abilities grow considerably since they left university.

What seems obvious when we stop to think about something like writing or reading is less obvious in matters that are more difficult.

It isn't unusual for those of us involved in working in the congregation—whether with the congregation as a whole, with women's groups, men's groups, Sunday School, or children—to be frustrated by the fact that what we do seldom seems to make much difference in people's lives. We want people with needs to be part of our congregation, and we are frustrated when our efforts to help them with their needs don't seem to bear much fruit.

When we work with those who have addictions, whether to illegal drugs, prescription drugs, nicotine, or alcohol, it is obvious that overcoming the addiction is likely to take time and hard work. As helpers we have to be prepared for those we help to fail and have to begin again. But these obviously hard cases aren't the only ones that require our loving patience.

One person needs better employment, so someone finds out the person's educational background and occupational interests. Then the two of them go the local community college to see what opportunities are available, signing them up for high school diploma equivalency classes, putting them in contact with a counselor, calling to remind them about the equivalency classes and offering to give them a ride if they need it. A year later, little has changed. No high school diploma, no further contact with the counselor.

Another person is perhaps a hoarder and in any case someone whose house is a disaster. There is no place to sit down when visiting; the cat has soiled a large place in the carpet; there are plates of food here and there and cat hair everywhere. The women's organization goes in to help: they clean everything up and put things away, showing the person at each step what they are doing, buying cleaning supplies, explaining how to keep order. Not long afterward, though, the situation is the same.

Someone who previously had lapsed from the faith decides to return. This person has the best of intentions and has lofty spiritual goals. Within a few months, however, he or she is more or less back to their previous position, but now feeling guilty.

Rather than thinking of such situations as ones in which a person either is or is not what they ought to be, as if no longer being addicted, having the right training, living in an orderly way, and being faithful were like an electric switch, either fully on or fully off, we ought to think of them as we do matters of maturation, as things that happen over time, processes rather than one-time events.

All of us know that about ourselves. Most of us know it about our spouses and children. But too often when it comes to others we have different expectations.

The motto of the LDS Relief Society (the women's organization of the LDS Church) is "Charity Never Faileth," from 1 Corinthians 13:8 and Moroni 7:46. In 1 Corinthians the word faileth translates a word that means "to fall": charity never falls down; it continues. 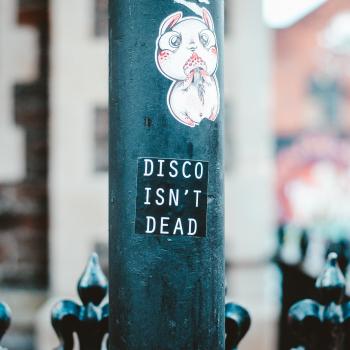 Discordian Jubilees: Discoflux (Or, Staying Alive)
Thumper Forge
Get Patheos Newsletters
Get the latest from Patheos by signing up for our newsletters. Try our 3 most popular, or select from our huge collection of unique and thought-provoking newsletters.
From time to time you will also receive Special Offers from our partners that help us make this content free for you. You can opt out of these offers at any time.
see our full list of newsletters
Editor's picks See all columnists