Most people know that The Church of Jesus Christ of Latter-day Saints sends out missionaries in their late teens and early twenties, giving them brief language training if they need it, and pairing them up to proselytize in 347 missions all over the world. Young men have made up most of those missionary pairs, though young women could also be called on missions and until recently made up about 15 percent of Mormon missionaries.

The LDS Church has gone about mission work in a variety of ways since its beginnings. It sent out missionaries "without purse or scrip," not only in the 19th century but, for a few, as late as the '40s of the last century. For most of its early history it sent out older missionaries, and then in the 20th century sent out younger missionaries. For a long time missionaries served for indeterminate lengths of time, then for three years, then two-and-one-half, for a short while eighteen months, and now two years.

Mormon Missionaries save money to pay for their missions, and their parents are expected (though not required) to make any needed additional donations to cover mission costs, which are averaged out over missions so that missions in places like Tokyo or London don't cost more than missions in less expensive places.

Missionaries are assigned the mission in which they will work. They can express a preference, but ultimately they go where they are called and that is often someplace other than their preference. While they are missionaries, they work full time, with one-half day off weekly to take care of cleaning, writing letters, and recreation. They call home only a couple of times per year and communicate with loved ones only by mail and email.

For much of the 20th century young men were eligible to be called at the age of nineteen (with exceptions in some countries to allow eighteen-year-olds to serve), and young women were eligible at the age of twenty-one. As far as I know, there was never an official explanation of that difference between the eligibility ages of men and women. However there was a widespread assumption that it was to discourage missionaries from falling in love with each other, and another widespread assumption that it was to discourage women from going on missions.

Last October the president of the LDS Church, Thomas S. Monson, announced a policy change. From then on all young men would be eligible to apply for callings as missionaries at the age of eighteen rather than nineteen, and young women would be eligible at the age of nineteen rather than twenty-one. There is still no explanation of the difference in age of eligibility, but the new policy puts in question the previous assumptions about the age difference, at least as they relate to current practices.

This change in the age of eligibility makes a difference to young men who now can leave for missionary service immediately after high school rather than go to college for a year before beginning that service. But that difference is not as big as the difference it makes for young women. The Church says that in the weeks following President Monson's announcement missionary applications went up almost six-fold, with women comprising more than half of the applicants.

Predictably the number of applicants has gone back down, though it still remains double the number before the announcement, and women and men are applying in roughly equal numbers. The approximately 24,000 missionaries around the world are on the increase. You're likely to see more of them in more places, and you're certain to see more women missionaries.

But when you see these young men and women, what are you looking at? Non-Mormons see young people on bikes or on foot knocking on doors or stopping people on the street to tell them about Mormonism. Most imagine aggressive sales-type tactics designed to get these pairs of missionaries through the door where they will proceed to try to argue the occupants into submission. They generally see people to be avoided.

I'm sympathetic to what they see. I see the same thing when I see evangelists of other religions at work. But having been one of those missionaries, and having had two children serve as missionaries, I don't see in Mormon missionaries what others see. Instead I see young people who are not so different than most other people their age, with similar interests and aspirations.

I see people who really do want to preach the gospel, but who aren't likely to be very aggressive when they do so. There are exceptions. There are perhaps some missionary leaders who can persuade their charges to be aggressive. But most young people don't have a taste for that kind of approach to things, and few church leaders encourage it. Most missionaries see their job to be giving people a chance to hear what they have to say, offering an opportunity, looking for those who are interested rather than forcing themselves on people who aren't interested. 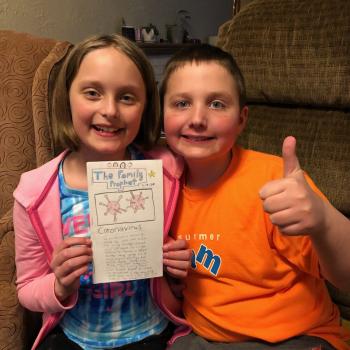 A Letter about COVID to My Future Self
Chris Gehrz
2

Smart people saying smart things (7.7.21)
Fred Clark
Get Patheos Newsletters
Get the latest from Patheos by signing up for our newsletters. Try our 3 most popular, or select from our huge collection of unique and thought-provoking newsletters.
From time to time you will also receive Special Offers from our partners that help us make this content free for you. You can opt out of these offers at any time.
see our full list of newsletters
Editor's picks See all columnists