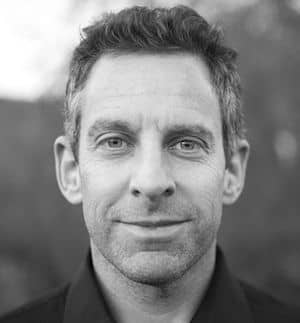 Samuel Benjamin Harris (b. Apr. 9, 1967) is a neuroscientist and author best known for his critiques of religion.

Harris was raised in a nonreligious home in Los Angeles. He attended Stanford University as an undergraduate, where he became interested in philosophical and religious questions. During this period he experimented with ecstasy and other psychotropic drugs, later crediting those experiences with many of the insights that fueled his later work. He left college in his sophomore year to travel in India where he studied meditation, another strong influence on his perspective. He would later return to Stanford to complete a BA in philosophy.

Shortly after the terrorist attacks of September 11, 2001, Harris began researching and writing The End of Faith: Religion, Terror, and the Future of Reason, arguing that civilization can no longer afford to coexist with religious ideologies. Published in 2004, the book won the PEN/Martha Albrand Award for First Nonfiction and became a New York Times Bestseller. He responded to critics of the book two years later with Letter to a Christian Nation.

The End of Faith came out within three years of three other books with a similar focus and uncompromising posture: Richard Dawkins’s The God Delusion, Daniel Dennett’s Breaking the Spell, and Christopher Hitchens’s God is Not Great. The similar timing and approach resulted in the four atheist authors being nicknamed collectively the “Four Horsemen of the New Atheism.” Of the four, Harris in particular has been accused of Islamophobia by some critics for his suggestion that among the world’s religions, Islam poses a unique threat.

Though an atheist himself, Harris resists the label, claiming that it is religious in origin and preferring to be seen as an advocate of critical thinking. In 2007 he founded Project Reason, a charitable organization to spread scientific knowledge and secular values.

Other books by Sam Harris have explored morality, lying, free will, and the benefits of meditation.

DISPATCHES FROM THE CULTURE WARS