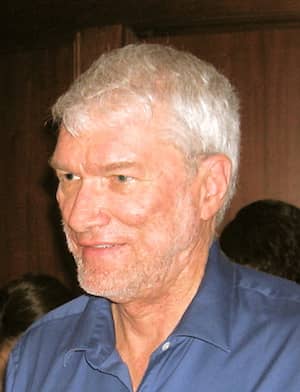 Kenneth Ham (b. Oct. 20, 1951) is a Christian fundamentalist evangelist and president of Answers in Genesis, a U.S. nonprofit “dedicated to enabling Christians to defend their faith and to proclaim the gospel of Jesus Christ effectively” and “to expose the bankruptcy of evolutionary ideas.”

Born in Australia, Ham studied Environmental Biology at the Queensland Institute of Technology, then taught high school science in the mid-1970s. His realization that many of his students considered the findings of science to disprove the Bible led him to quit his teaching position. He founded two companies that provided creationist teaching materials to Queensland public schools, where equal time for creation and evolution were mandated by law.

In 1987, Ham moved to the United States to take part in speaking tours promoting strict biblical literalism, including six-day creation and the idea that the earth is roughly 6,000 years old. His organization grew through mergers with existing creationist organizations, and in 1997 took the name Answers in Genesis (AiG).

The Museum has been the subject of several large-scale petition campaigns by scientists, educators, and science advocacy organizations concerned that the “scientifically inaccurate materials” in the displays will contribute to scientific illiteracy.

In 2004, Ham was awarded an honorary doctorate by Rev. Jerry Falwell’s Liberty University.