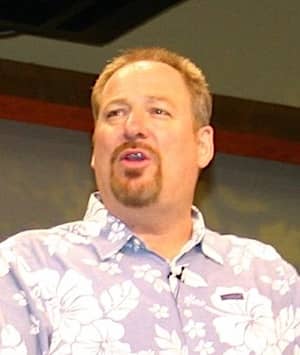 He founded Saddleback Church in 1980, meeting for the first time on Easter Sunday in a high school theater. In 1995, the current building was completed, at which point Saddleback had 10,000 people in weekly attendance. Warren’s congregation-building techniques were the subject of his first major book, The Purpose-Driven Church, published the year of Saddleback’s completion.

He followed in 2002 with the New York Times Bestseller The Purpose-Driven Life, which has sold over 30 million copies.

Warren’s political and social views are conservative, including opposition to reproductive rights and same-sex marriage, and support for abstinence-only sex education and a creationist worldview. He was a public supporter of California’s Proposition 8, which defined marriage as the union of one man and one woman in 2008.

In 2008, Warren hosted the Civil Forum on the Presidency, a conversation with presumptive presidential nominees John McCain and Barack Obama at Saddleback Church, now the eighth largest church in the U.S. And despite his conservative positions, Warren gave the invocation five months later at the first Presidential Inauguration of President Obama, a decision that angered advocates of LGBT and reproductive rights.

Image by AllAboutYouGod/UpsateNYer CC BY 2.0 via Wikimedia