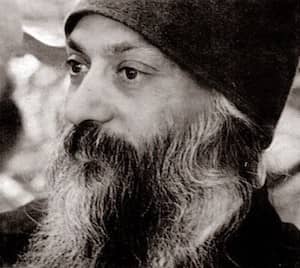 Born Chandra Mohan Jain in a small village in the central Indian state of Madhya Pradesh, Rajneesh was the first of 11 children in a family that practiced the minority Jain religion. After completing advanced degrees in philosophy, he began teaching at universities and lecturing publicly in the 1960s. He criticized Hindu orthodoxy and the teachings if Mohandas Gandhi while advocating sensual pleasure and a relaxed sexual morality, opinions that garnered a large following while outraging religious authorities.

In 1970 Rajneesh began to describe a new discipline called Dynamic Meditation. He began initiating disciples or “Rajneeshies” into a philosophy that blended the Buddhist capacity for enlightenment with many Western ideas, including those of Freud and Nietzsche, and a large component of ego liberation and sexual freedom.

He established an ashram (a spiritual retreat) in the western Indian city of Pune in 1974, which eventually grew to host more than 25,000 visitors each year. As tensions with surrounding Pune residents grew, he relocated to north central Oregon in the United States and established the town of Rajneeshpuram on the site of a 64,000-acre ranch.

As the settlement grew, conflict increased with neighbors, leading eventually to tensions and violence within the Rajneeshie circle and several indictments, including one against Rajneesh for conspiracy to evade immigration laws. He eventually entered into a plea agreement that required him to leave the United States and return to India. It was in the final years of his life that he changed his name to Osho.

What Osho Said about J. Krishnamurti and His Work on His Death