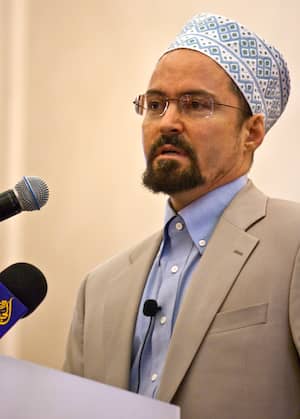 Hamza Yusuf (born Mark Hanson on Jan 1, 1958) has been described as perhaps the most influential scholar of Islam in the Western world.

Yusuf grew up a Greek Orthodox Christian and intended to become a priest in that tradition until reading the Qur’an, followed by a near-death experience at age 18, led him to convert to Islam. In the late 1970s, Yusuf studied under Abdalqadir as-Sufi in the United Kingdom, then studied Sharia sciences in the United Arab Emirates before continuing his education in Algeria, Morocco, and Mauritania in the mid-1980s.

In 1996 he co-founded Zaytuna College, an institution dedicated to the revival of classical Islamic learning in Berkeley, California. His efforts as a public intellectual have included divorcing acts of violence and terrorism from any religious justification. As a result, he has been declared an apostate (Arabic: murtadd) by the Islamic State of Iraq and the Levant (ISIL).

Yusuf is often referred to with the honorific Imam or Shaykh.

ALTMUSLIM
In Defense of Shaykh Hamza Yusuf and the Personal Reform of Traditional Islam
For the Sake of the Struggle, Don’t Give into Fear – Reflections from Sh. Hamza Yusuf


Image by Omar Chatriwala CC BY 2.0 via Wikimedia