The painting must be thirty feet high, and that's probably lowballing it. Despite having nearly completed an Art History minor in college, I couldn't tell you what style it's in—not very realistic, but not primitive, either. The faces are cut out of bold lines, the hair out of large bands that shine with individual gradients of light and dark. The figures wear robes shaped like stacks of rumpled blankets. Texture permeates the work, like a quilt or a black velvet Elvis painting. It may actually be a fabric work—obviously, it would be disrespectful for me to walk up and stroke it.

I mean, it's a painting of the Crucifixion.

The father of the bride, a kindly man with olive skin and a perfect beard, stands next to me at the back of St. Wenceslaus. It's the day before my best friend's wedding, and he and his fiancée are up front getting the last details in place with Deacon George, who might be the perfect model of the crusty but loveable old churchman. In a moment I will be called up to run through the steps of the wedding, including a stern admonishment not to show up with any alcohol on my breath. ("You're signing your name as a witness to the Marriage License," Deacon George reminds me. "It's a sacred document, and you need to be of sound mind to make it legal!") But for the moment, I have nothing better to do than to make small talk with the bride's father.

I gestured at the painting. Two figures flank Christ, who, naturally, dominates the frame. Even for a heathen like me, the one on the left is easy to pick out: nobody else wears a blue habit but the Virgin Mary. The one on the right, however, could be anybody—long, brown hair, a robe the color of red wine, a soft, round chin. The bride's sister thought it might be Mary Magdalene.

"Who's the other woman in the painting?" I asked.

"St. James, the brother of Jesus," he said. Then, after a brief pause, "My chosen saint."

He accepted my apology in good humor. "In those days, everybody had their hair long. An easy enough mistake to make." But still, it left me uncomfortably reminded of just how much of a stranger I am here, in a church that sits only two blocks away from the house of my childhood.

This is not the first wedding where I have been part of the bridal party; for that matter, it isn't the first Catholic wedding I've been a part of, either. I like being in the wedding, and I am genuinely honored to be asked to play such a role for my friends. But it leaves me uneasy, too. I have never managed to enter a church without someone making a perfunctory joke about me bursting into flames the moment I enter the nave. The jokes may be in fun, but there's a nugget of truth in them: there's something genuinely incongruous about my presence here. However lovely the building, I don't belong in it.

Watching my friends get married perhaps inevitably leads to thoughts of what it would be like to get married myself. It's one of the thorny bits in any Pagan's life (at least, those Pagans who believe in marriage). Go with a handfasting or another type of Pagan ceremony, and we have to exclude those who disapprove of our faith, such as otherwise beloved relatives. Go with a church wedding, and we bury our religion on one of the days where it should be most meaningful. Try a secular wedding, and we have the same problem (and Grandma is still probably upset that we didn't have a preacher). Have multiple weddings? one for the Pagans and one for the rest? But the point is that the ceremony transforms you; where once there were two, now there is one. Isn't it self-defeating to do that twice?

Few events are so personal, so public, and so perilous. No wonder my coven-brother eloped.

The other thing is that I genuinely like the ritual of the "traditional" wedding. Not the churchy parts, necessarily, but I like the tuxedos and the white dress. I like the groomsmen and the bridesmaids. I like the rings and the I-dos. I like handfastings, but somehow the ritual feels incomplete; as an American, I know what a wedding looks like, and a handfasting ain't it. And if it seems lacking to me, how would it feel to my friends who have never seen a circle cast in their lives?

It's a problem I'm sure I'll have to negotiate someday. But today, at least, the ritual is for somebody else, and I can take it in, my Pagan spirit delighting in sampling all sorts of ceremonies. I can simply give a contented smile as my friend marries his bride, patting the Thor's Hammer beneath my collar before the Deacon calls me up to sign the marriage license. 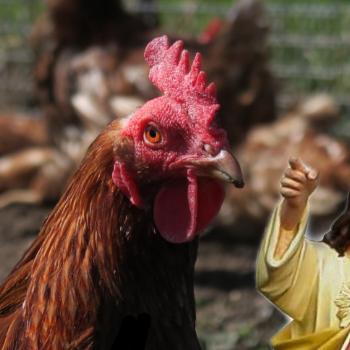 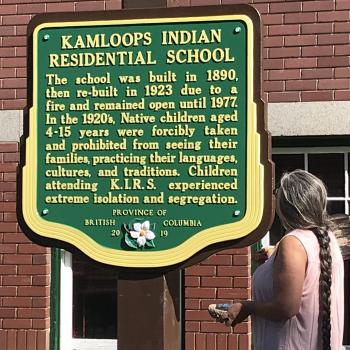 Visionings ^1: Whale Eyes
Kevin Antlitz
Get Patheos Newsletters
Get the latest from Patheos by signing up for our newsletters. Try our 3 most popular, or select from our huge collection of unique and thought-provoking newsletters.
From time to time you will also receive Special Offers from our partners that help us make this content free for you. You can opt out of these offers at any time.
see our full list of newsletters
Editor's picks See all columnists