Soren Kierkegaard and Mary Daly Walk Into a Bar...

Soren Kierkegaard and Mary Daly walk into a bar—okay, it could be some other spiritually oriented thinker with Nietzsche or Marx, or maybe Freud, but this time it was actually Soren and Mary.

The bar was called The Think Tank, and it was the sweetest watering hole in the Hereafter, a place for all sorts of Heavy and Serious Types to gather, knock back a few, and do what the Heavy and Serious do best: exchange opinions.

This time the talk turned to an oldie but goody: Can people of different faiths get along? Do they have much—or anything—in common? In particular, Do Jews, Christians, and Muslims Worship the Same God?—a provocative question asked by four first-class theologians in a new book.

Since there is no time after death, Soren and Mary were able to read the book in no time at all. And here are their answers—or, perhaps a better way to put it: here are their responses.

Mary: The same God? Of course they do. The problem is that it isn't the God they think it is. It's not the Spirit of Life, the Goddess of Living, or the Source of Love. No, it's just their own violent male egos projected onto a cosmic stage. Their penises a million times bigger, but still the same sorry old male organ of conquest and domination. The differences of which they make such a big deal—one book or another, praying on Saturday or Sunday, the Trinity or Adonai or Allah --are insignificant details. They all love to kill, they all hate women, and none of them ever got up at three in the morning to feed the baby.

Soren: Ahh women, always taking the emotional way out, stuck in immediacy. Do another shot and calm down.

Mary: Don't confuse emotional catatonia with calmness, Soren. It's not my fault you thought loving God meant you could never get laid.

Soren: I saw Regina last week, so I'll let that pass. Back on topic: philosophically, of course, nothing/everything is the same and nothing/everything is different. There is no sameness or difference without a context. So 'same' or 'different' in what respect? And there's a question that can go on forever.

But a question that my old friend (yeah, we hashed it out and saw that we were closer than I'd realized) Hegel called the "bad infinite." You go on and on, but you never get anywhere.

So let's try it my way. I have two questions:

First, are any of these Jews, Christians, and Muslims worshipping Anybody? For religion is about subjectivity, and subjectivity is about passion and passion is not about some theological account of God's attributes, it's about devotion, commitment, and the choice of the holy over selfishness or despair. So I ask again—all these people who say they are worshipping God—are they? Or is religion something that allows them to sit back and smoke a pipe in comfort, relaxing in the knowledge that they are in tune with the Divine—when in fact their faith has never even made them the slightest bit uncomfortable, never required a sacrifice, never challenged their attachments to money, position, social conformity, group power, or the special self-interested joy of being 'holy.'

Soren: Call it male, call it the way most people live, my bodhisattva friends call it the ego or the little self.

Mary: I call it sick and cruel. But then again I still have three or four eternities to go to work on my compassion for human weakness, especially that of men.

Soren: Not my strong point either. We should discuss it some time. I'll leave you with one last thought—it's getting late and the whiskey has gone to my head.

Why would we ask the question in the first place? Why should I care what God my neighbor is worshipping? Isn't the real, the only question: What God am I worshipping? Is it the God who demands my full devotion and love? Or the one who is happy with lip service? Is it the God who says, "Be interested in other people's faith, and never mind your own?" Or the one who says, over and over: "Do justice, love mercy, love your neighbor, help the poor, respect other people." Any single one of those could take a lifetime to master. Doing all of them will surely take several lifetimes (got to admire the Hindus, they've got that one right).

Who has time or energy left over to worry about what other people are doing?

Mary: Look, I know you're a political nitwit, but even you can see that what other people do is pretty important.

Soren: Politically, yes. Yes yes yes. But not religiously. What those people have asked is not a religious question.

For more conversation on Do Jews, Christians, and Muslims Worship the Same God? visit the Patheos Book Club here.

How I Read, A Lot
Cara Meredith
4 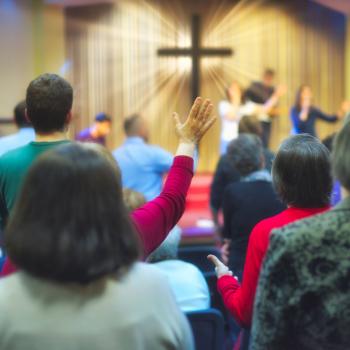 Canadian Atheist Group: Churches Breaking COVID Rules Must Lose Tax-Exempt...
Val Wilde
Get Patheos Newsletters
Get the latest from Patheos by signing up for our newsletters. Try our 3 most popular, or select from our huge collection of unique and thought-provoking newsletters.
From time to time you will also receive Special Offers from our partners that help us make this content free for you. You can opt out of these offers at any time.
see our full list of newsletters
Editor's picks See all columnists