A few of my nieces and nephews, and one of my surviving siblings, are in the room with me as well. I can tell that my sibling isn't entirely comfortable with all of the ceremonies going on outside, and which will follow when I actually do die, but that they are here is still something, and a thing not to be ignored nor diminished. My nieces and nephews are a different story entirely: if they weren't here, I'd have put my death on hiatus until they arrived. They have not only been supportive of me in the past two years, but one of them has been involved in this religious practice since she was a tween. (Giving her those Egyptian hieroglyphic blocks for her first birthday was a really good idea!) And, since she's been living at the Temple compound for just over a decade, I know that my family's connections to this religion will persist for a long time.

Two young people are in the room as well: the outgoing head of the Phratria of Polydeukion, who is about to turn twenty years old, and the incoming head of it, who is now fifteen. While they are a smaller group than the Mystai of Antinous, and always have been, they are perhaps even more dedicated than many of the Mystai of Antinous. They have that youthful energy and optimism and hope, and they want to be taken seriously by anyone since society-at-large still doesn't take young people seriously in anything, much less spirituality. Because the Mysteries of Polydeukion were revealed to young people exclusively back in the 2020s, they have been maintaining that organization since then, with some gentle guidance from the Ekklesía Antínoou, since that time, and very definitely since my own initiation into those Mysteries by the original Phratriarch (who is now in his mid-50s). I know the group is in good hands, because they are not my hands, and never have been.

And then, there are my allies. They're not just in the room here, but have been holding continuous vigil outside it for days. At the moment, the head of AMHA is in here, and I can hear the woman from Sharanya chanting Kali mantras outside the door, and many of the others are joining her. Two Come As You Are Coven members have been making me food for the last few days—a little less every day, as my appetite has been diminishing with each day's passing. (It's more food for everyone else to eat, and to be donated to the needy as well in our Temple's soup-and-salads kitchen that feeds the underprivileged of this area daily.) I barely finished one slice of the chocolate orange they brought me this morning on my breakfast plate, after it had been offered in yesterday's Temple rituals. This morning, one of the CAYA members, at my request, sang and danced a hymn to Artemis that made me smile and shed tears of joy a bit; I'll be missing the Natalis Dianae in August, and the Megala Antinoeia later this month, but I have not missed the chance to honor that great goddess one last time before I depart. The representatives from House Sankofa and the Thiasos of the Starry Bull have been standing by, but are mostly quiet at this point. The head of Neos Alexandria is outside, and I've already heard her planning the memorial volume to me that will be published by Bibliotheca Alexandrina in the next year.

I suspect the founder of Mup is outside inciting an orgy in another side-chapel with some of the Unnamed Path, Minoan Brotherhood, and Radical Faeries members who are present. I know people from at least three Afro-Diasporic faiths are outside, and the Kemetic Orthodox religion is also well represented. The PanDianics are certainly out there, too, and there are even a few feminist separatist Dianics out there that I've grown to respect and be friends with over the years, even though we don't remotely agree on almost anything. There are various Wiccans and Druids outside as well, polytheists of many descriptions, Gnostics, Thelemites, Fellowship of Isis priestesses and priests, and even a number of Christians and Sufis joining in the vigil taking place. My colleagues from a few Shinto Shrines in Japan and in the Cascadian Republics are also present, though they will be departing soon so as not to be tainted by my death—I fully understand this, and also appreciate the one Guji who is also a Buddhist who said he would not leave. And, my colleague from House Thyrsatrae is also standing by, holding the space as only they know how and protecting it, and is ready with the waters of Nyx to anoint my body as soon as I have stopped breathing. It won't be long now.

On the walls, I've asked the various icons of Antinous, Hadrian, Sabina, Polydeukion and the Trophimoi and Herodes Attikos' family, Lucius Marius Vitalis, Glykon, Chnoubis, the Tetrad++ Group, Bes, Hathor, Ptah, Nefertem, Sekhmet, Demeter, Persephone, Artemis, Sterculinus, Hermes, Lugus, Hanuman, Shiva Nataraja, Narasimha, Brigantia, Brigit the Poet, and Cú Chulainn (and a few others) to be interspersed with photographs of old friends on occasions I have remembered and been thankful about for decades. There's the photo of me and Margot Adler at the book launch for her fourth edition of Drawing Down the Moon in 2026; there's myself with Selena Fox of Circle Sanctuary in 2022 when I was at last able to attend a Pagan Spirit Gathering (since I was able to get someone with a camping trailer to accompany me!); there's Don Frew and me at the World Parliament of Religions in 2033 in Rio de Janeiro (and I'm sunburned like you wouldn't believe after having been at a beach in the country where thongs were invented!); there's me and the Gujis of the two Tsubaki Grand Shrines in Japan and North America when I went to Japan in 2030; there's me and the (at-the-time) new Dalai Lama in 2040; there's me and Rabbi Blikstein near the Wailing Wall when I visited Israel in 2045; and there's me and Pope Emeritus Hadrian VIII in 2050, not long after he resigned his papacy and Pope Francis IV was installed. There's also a photo of me and three former United States presidents—back when there still was a United States!—in 2029: Bill Clinton, Barack Obama, and Hillary Clinton. I was surprised when I got the invitation to be at the Prayer Breakfast that year, and I remember very well how many people protested my presence, but nonetheless, the food and the conversation were quite memorable. 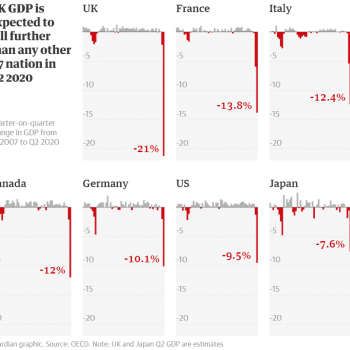 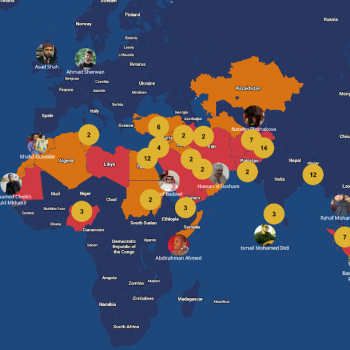 The 666th Day
C. Don Jones
Get Patheos Newsletters
Get the latest from Patheos by signing up for our newsletters. Try our 3 most popular, or select from our huge collection of unique and thought-provoking newsletters.
From time to time you will also receive Special Offers from our partners that help us make this content free for you. You can opt out of these offers at any time.
see our full list of newsletters
Editor's picks See all columnists