The Sacred Nights of Antinous have come and gone again for 2013, and a variety of insights and experiences have arisen out of them this year for me and some of my co-religionists. While I'll be taking apart some of those in different fashions on my personal blog over the coming weeks, I wanted to bring out one important insight that has been an adjunct to those here, as it is something that is often overlooked, assumed, or misunderstood by the wider modern Pagan movement.

That insight is the title of this column: polytheism is not relativism. But, it needs a bit more explanation than that, I suspect.

I should note here that my own notions about and understandings of polytheism have not been static, and are not currently what they have been at various points in the past. I think my evolving understanding of it -- in the context of both my own deepening experiences with deities and other varieties of divine being, and my increased knowledge of the long legacy of polytheism in human history through many different cultures -- is better now than it was when I first started out as a modern Pagan more than twenty years ago, and when I first started out as an Antinoan more than eleven years ago. I've gone through periods of softer polytheism, and even monism at certain points, usually under the influence of people that I considered to be my spiritual superiors in whom I placed a great deal of trust and questioned very little (which is what they wanted, despite arguing to the contrary!). I wish that my current refined and nuanced understanding had been with me at a much earlier date, as it would have saved me a great deal of difficulty.

The fundamental difference between monotheism and polytheism -- perhaps it need not be said -- is that there are many deities rather than only one. The natural inferences that follow are manifold, but one of them is that if there are deities in more than one number, then the ultimate explanations and divine motivations that can inform human life are multiple rather than singular. Even with the diversity of deities that polytheism admits, there is a further corollary acknowledgement of a great variety of ways to approach each deity, to interact with them, to perceive them, and to worship or be devoted to them. They appear in a diversity of forms, often with a multitude of epithets and by-names to accompany this cavalcade of appearances and functions.

An earlier, less-refined version of myself would characterize this feature of polytheism as indicating that "truth" is not singular, but that it is instead multiple. Indeed, it isn't even proper to speak of "truth" as an "it" which is multiple (which would be monistic!), but instead as a "them," since they truly are multiple! This is a pluralistic viewpoint, and one that I think accords well with not only my experience of reality, but also with what the most current findings of science indicate about reality. (This is the case especially with biology, but also with physics; there are four fundamental interactions/forces and six flavors/types of quarks, which looks much more like polytheism than monism, despite what many monists have tried to say about science!) This viewpoint translates easily into an ethic of individual respect, of valuing personal and individualized relationships with everything (whether humans, deities, or any aspect of our spiritual or material environment), and of seeking one's own answers to every important question rather than placing any trust in creedal statements or one-size-fits-all answers. I still hold all of the latter to be the hallmarks of my own approach to life.

The less-refined aspect of the above, though, is the lack of a caveat on the notion that "there are many truths." Yes, I think there are many truths, but "many" does not automatically mean every or any; and it certainly doesn't mean that all things are truly equal, and thus there is no "real truth." And, I suspect, this is where a huge number of modern Pagans and polytheists over-read pluralism, and think it means "anything goes," or the all-too-common maxim "nothing is true, all is permissible" (paraphrased slightly from Vladimir Bartol's Alamut).

Let me give an example, from my viewpoint and experience, and with particular relevance to the nature and purpose of the present column and my overall project here at the Patheos Pagan Channel. Under no circumstances can anyone ever convince me that homoeroticism or gender variance is "evil" or "unnatural." Both of these occur in nature, amongst species who have no interactions with or influence from humans, spontaneously and with enough regularity to demonstrate that they are common biological variations and add to the diversity and strength of a population. There are many religious people (from a plethora of religions, though some seem to hold it as a tenet almost as important as their belief in a supposedly singular deity) who hold as an article of their faith that homoeroticism is evil and sinful, and that both homoeroticism and gender variance are "against natural law." But this view is simply erroneous, ill-informed, and as far from truth and reality as can possibly be. 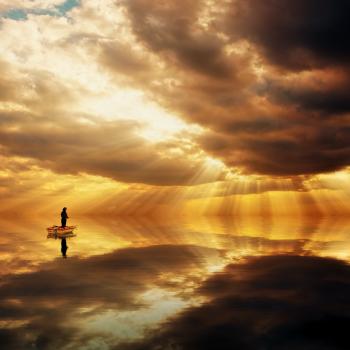 How to Impress an Angel
Joey Willis
2

N.T. Wright's Galatians-- Part Seven
Ben Witherington
Get Patheos Newsletters
Get the latest from Patheos by signing up for our newsletters. Try our 3 most popular, or select from our huge collection of unique and thought-provoking newsletters.
From time to time you will also receive Special Offers from our partners that help us make this content free for you. You can opt out of these offers at any time.
see our full list of newsletters
Editor's picks See all columnists