I apologize for the long hiatus since I last wrote this column. Indeed, there have been many changes in the world (Super-Storm Sandy, the 2012 Election) and in Patheos.com (the loss of Star Foster, The Wild Hunt, and Teo Bishop, but the gain of Dr. Christine Hoff Kraemer as Pagan Channel Editor) since last I wrote, and in my own personal life, I'm now teaching more classes than I ever have in my working career. Yet I'm still not full-time, the money isn't as good as one would hope, and my free time is almost non-existent. Rather than write about any one of those things, or a billion others, however, I'd like to write the column that I had planned to write not long after the last was published.

You might see my title above and wonder if this column will be about reincarnation. It will be, in a sort of roundabout manner; perhaps one of my next columns will deal with that topic a bit more directly. Instead, what I want to focus on here is a fact that almost everyone who is at all aware of popular culture has realized at some point in the last five years: there aren't too many new ideas out there. There are constant re-makes of films and television shows, near-copies of others on different networks, and a variety of other such entertainment "revivals." ABC's Modern Family has been doing very well over the last few years, and so it was only a matter of time before NBC tried to do something similar. That seems to be the impetus behind the show The New Normal. And yet, it's not at all a remake or a version of Modern Family. It's its own thing, but it has strong elements of several other shows that have come before it.

A little over a decade ago, I remember watching the first episode of NBC's Will & Grace (which almost sounds like it could be a show about a Thelemite and a Christian "odd couple." In fact, it's about a gay man and his fruit-fly—a somewhat nicer term than "fag-hag," but the same concept ultimately—and their various friends.). I was shocked, awed, and excited that in the first moments of the pilot, the lead male character turned out to be gay, since it had seemed from the trailers that only his friend Jack was gay. Will & Grace was a successful show for many years, and a "flagship show" of the popular gay consciousness—for good or ill—for much of that time. On the good side, it did demonstrate that there are many different types of gay men (even if "many" in that context mainly meant "two or three"). On the bad side, it didn't show its various gay characters in long-term, successful relationships for the most part. Further, while they had all the flair and fabulousness that many think are de rigeur for gay men, they were also largely desexualized.

As much as I had criticisms from the very start, I also marveled at how watching Will & Grace in the gay bar downtown (in a small city in a rather rural part of the country) was like a religious event for many. An uncharacteristic quiet would come over the crowd when it was on. It was also funny to see how some of the older crowd had to explain certain jokes to the younger crowd, but also vice-versa when there were current popular culture references. It was an interesting love-hate relationship on my part, and on that of many others who watched the show, I'm sure.

Now, NBC is trying it again with The New Normal, the difference being that the main gay couple in the show (Bryan and David) have been a couple for a while and are starting a family with the help of a surrogate mother. Bryan, played by the rather attractive Andrew Rannells, became famous for his role in the Broadway show The Book of Mormon. Now, whether he likes it or not, he is the "public face" of Mormonism, even though he's not a Mormon. Ironically, the Mormon Church banned the show on some television channels they own in Utah because they do not support its content, since it deals with a gay couple trying to start a family. I probably don't need to elaborate much further on the officially anti-LGBTQ stance of mainstream Mormonism generally at this point.

In an interesting recent episode, the couple considered a godparent for their child, and each dealt with their own religious backgrounds: Bryan's lapsed Catholicism and David's lapsed Judaism. I'll have more to comment on this in a moment. Suffice it to say that for now, it's interesting that they have addressed the religious angle already in the show, despite its only having had a handful of episodes.

But what seems most like reincarnation to me is the character played by Ellen Barkin: Jane, the "Nanna" of Goldie (the surrogate mother carrying Bryan and David's child). She is a Midwestern conservative who is homophobic, racist, and (Protestant) Christian to the core. Jimmy Fallon commented that her character is like a female Archie Bunker, and he's quite correct in that statement. 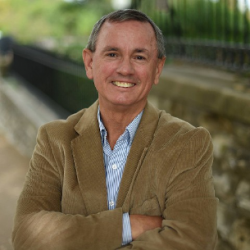 No, No, I Didn't Mean HIT Her!
Libby Anne
Get Patheos Newsletters
Get the latest from Patheos by signing up for our newsletters. Try our 3 most popular, or select from our huge collection of unique and thought-provoking newsletters.
From time to time you will also receive Special Offers from our partners that help us make this content free for you. You can opt out of these offers at any time.
see our full list of newsletters
Editor's picks See all columnists