At last, a mature cisgendered American adult who has actually demonstrated that he's beyond the middle school playground level of maturity!

The British comedian I alluded to above is Alan Davies, who stars on the hit show Q.I., and who had a stand-up comedy show last year called Alan Davies: Life Is Pain, which you can watch on YouTube. In the most understated, nonchalant , and charming fashion I've ever seen a cisgendered heterosexual do so, he began several parts of his routine with, "So, I've never had the gay sex." While his phrasing of it might seem a bit odd, trust me, he says it with utter innocence and not an ounce of malice. At no point does he follow this up with "Because I'm not a poof!" which almost any American comedian would add. No small number of American actors who have played gay roles on film or television have then gone on talk shows afterward proving in every way possible that they are "just as manly" (and often sexist, rude, and homophobic) as they ever had been before "being paid to play gay." He almost makes it sound like it is not only a possibility that everyone should consider, but he even seems to make a case at some points that it might have been "interesting" to have at least tried it to make sure... and, that's not something he's joking about, the jokes are around other matters that come up in his discussion of these topics. This is a man very secure in his sexuality, indeed!

In a speech I gave in 1998, at an event I organized called "Coming Out Heterosexual" at the Jesuit university I was attending for my M.A. at the time, I commented that the sign of ultimate progress in combating homophobia would be for non-gay people to be mistaken for gay, and yet not having to refute the accusation, and the accusation being made in the first place not as an accusation but instead just as a matter of honest and benign inquiry.

The latter has not happened yet, and "outing" of various individuals still goes on in ways that are not always lacking in malice or having detrimental intentions (and not even for individuals who have gained from a public stance of homophobia and thus "deserve" to be outed).

But, it seems, the former is happening more and more, and will no doubt continue. I had hoped in 1998 that it would start occurring before my life ends; fifteen years is actually not a bad timetable for it to have started in noticeable numbers.

Pick Up The Newspaper! Actualizing The Artificial Bodhisattva
Dosho Port
3 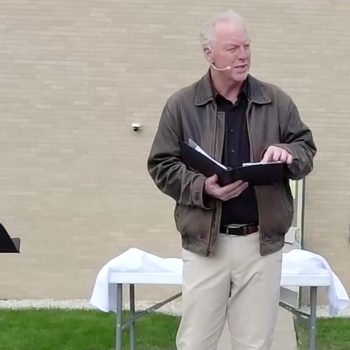 Concrete Mystery
C. Don Jones
Get Patheos Newsletters
Get the latest from Patheos by signing up for our newsletters. Try our 3 most popular, or select from our huge collection of unique and thought-provoking newsletters.
From time to time you will also receive Special Offers from our partners that help us make this content free for you. You can opt out of these offers at any time.
see our full list of newsletters
Editor's picks See all columnists