A Fresh Wholeness: Reflections on Acts 4:5-12

We pursue here in this passage the implications that the early church found for the power of the resurrection of "Jesus Messiah the Nazorean," to translate the phrase of 4:10 quite literally. Peter, the craven denier of his Lord in Luke, has now become, accompanied by his colleague John, the great preacher of the emerging church and no end of aggravation for the religious leaders of Jerusalem. His healing of the lame man in the temple in Acts 3 has created a crisis for the Jerusalem leadership; if one reads his sermon to them in the very temple itself (Acts 3:12-26), which the lectionary gave to us last week, it is little wonder that they were "much annoyed" (4:2), as the NRSV has it. More literally, the word here means "being worn down." "Exasperation" may be the best reading. This emotion is what Paul feels in Philippi at the sooth-saying slave girl who day after day made a great deal of money for her handlers in the very place of prayer where Paul had converted the wealthy Lydia to the new faith (Acts 16:18).

Peter's sermon stirs a wide range of religious and secular leaders to act. Luke says that "the priests, the officer of the temple, and the Sadducees" (4:1) appeared, exasperated about the content of the sermon, most especially the bit about the resurrection of the peasant criminal, Jesus. Of course, the Sadducees were particularly galled by that resurrection talk, since they, as strict believers in the ancient Torah, thoroughly rejected such a claim. No idea of resurrection occurred there, and hence could not possibly have any validity. In an attempt to shut them up, Peter and John are arrested that evening and are forced to spend the night in custody. However, Luke makes plain that it is already too late, since "about five thousand" have already heard the word and have believed (4:4). This figure is of course wild hyperbole, since the temple is scarcely able to hold such a number of people, not all of whom would have been convinced of the new faith in any case. Luke does not want us to quibble about the numbers; the new faith is growing and nothing is going to impede its rapid expansion.

The next morning "their leaders and elders and scribes" assemble in Jerusalem. This is an intriguing list. "Leaders" is a very general term (archontes), while "elders" (presbyteroi) and "scribes" (grammateis) are members of the Jewish Council of the Sanhedrin, as Josephus makes clear in numerous places in his Antiquities of the Jews. In fact, this gathering appears to be in the council chamber and is a called meeting of the Sanhedrin, as 4:15 implies. And look who else is there: "Annas, the high priest, Caiaphas, (son-in-law of Annas), John (one manuscript reads "Jonathan" here, whom Josephus names as son of Annas and successor to Caiaphas as high priest), Alexander, and all who were of the high-priestly family" (4:6). We do not know who this John and this Alexander are, but Annas and Caiaphas and Jonathan (if we take the alternate reading) are well-known, thanks again to Josephus. Annas was high priest from 6-15 C.E., Caiaphas from 18-36 C.E., and Jonathan succeeded Caiaphas in the office. Thus, what Luke describes here is a kind of ghostly collection of all the high priests of Israel for some fifty or so years! This is not a historical scene, but an idealized confrontation between the old faith and the new. But the old faith of Judaism is supported by the "leaders" of the community, whoever they may be specifically, not only by the religious authorities of the time.

The multiple high priests ask the central question that has been engendered by the healing of the lame man. "By what power or in what name did you do this thing (4:7)? The question asks for two responses: what is the source of the healing (what is the "power" dynamis used?) and by what authority ("name" onoma) was it done? Peter's answer comes from one "filled with the Holy Spirit," Luke's stereotypical phrase for all those who are prophets of the early church. Again, as regularly in Acts, Peter preaches a sermon typical of early church preaching. "Leaders of the people and elders! If we are being examined today concerning kindness for a sick man, by which this man has been saved, let it be known to all of you and to the entire people of Israel that it is through the name of Jesus Messiah the Nazorean—whom you crucified but whom God raised from the dead—it is through him that this man stands before you healthy" (4:8-10).

Peter first describes the healing as a "kindness" (NRSV "good deed"). In a more official Greek sense it could be seen as a "benefaction," a sort of public service offered to a city. Thus, Peter in effect asks to be thanked for the healing rather than charged with some crime! However, he also adds that the man has been "saved" this day as well. Luke quite pointedly here uses the Greek sozo (compare tetherapeumenon in v. 14). This word has a very broad meaning, extending far beyond a "are ya' saved" mentality. It clearly has physical and spiritual and social dimensions. Peter warns the Sanhedrin that his actions on behalf of the lame man in the temple in the name of Jesus Messiah the Nazorean have world-shattering implications. 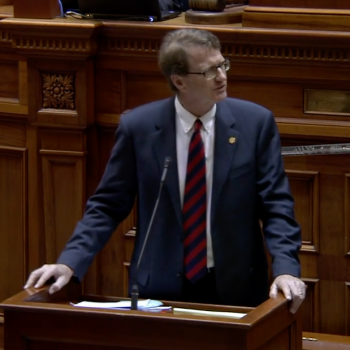 SC Lawmaker Decries LGBTQ "Rebellion Against God's Moral Law" on Senate Floor
Val Wilde
Get Patheos Newsletters
Get the latest from Patheos by signing up for our newsletters. Try our 3 most popular, or select from our huge collection of unique and thought-provoking newsletters.
From time to time you will also receive Special Offers from our partners that help us make this content free for you. You can opt out of these offers at any time.
see our full list of newsletters
Editor's picks See all columnists