The Message Without a Market

Some time ago now I read Walter Isaacson's biography of Steve Jobs. I can't completely explain my continued fascination with the Job's story. In part, I am sure it's because I am a Mac-ophile. (I really do believe that PCs are part of an evil empire.) In part, it is Jobs' single-minded pursuit of excellence. I have always been drawn to stories of single-minded devotion.

But Jobs' story is hardly a story of compassion or religious devotion. I am dubious about his lifelong dream of denting the universe (although I'll confess a measure of admiration at the boldness of it). His life was a strange mix of contradictions. He was a man who chose a path of Buddhist detachment, but he made products that drove desire. He suffered abandonment, but he also abandoned some of those who were closest to him.

But therein lies the other reason for my fascination with his story: There are insights here that Jobs would have never acknowledged, that apply to truths that were of little or no discernable interest to him.

One of those was his attitude toward marketing. To be specific, he didn't believe in it. When asked why he refused to spend much time on marketing, he argued that there's really no point, because people don't know what they need until we give it to them.

Now, taken as an attitude toward customers and consumers, Jobs' view could be characterized in completely negative terms. It is condescending, hierarchical, and presumptuous. It is also a bit simplistic, because Jobs' sensibilities were indirectly shaped by an intuitive sense of what people might like. In another way, however, he was often right and it was only the courage of his convictions that took those ideas from design to product, often through a torturous and expensive process.

One would have thought that Christian leaders had even more reason to assume that theirs is a message that doesn't need a market. So, why the excessively diffident, apologetic approach to the Christian message and why the saccharin denominational mottos designed to cater to public taste?

There are a lot of reasons and not all of them apply everywhere, but here are some of them that lie at the top of the list:

One, sometimes the messengers don't believe the message. Inevitably there are always a few clergy hiding out in the church long after they've lost the faith. Why? Some of them are embarrassed to admit it. Some don't know what to do instead (or don't know what to do without the pension). Some simply haven't been able to admit it—to themselves or to those they love.

Two, some leaders have confused being committed with being judgmental. Spiritual and emotional maturity is about making commitments in the face of competing claims, unanswered questions, and persistent ambiguity. But for some, indecision and diffidence is maturity.

They don't live this way in other aspects of their lives, of course. They are certain about their politics and science (which only betrays their lack of knowledge about both of those subjects as well), but pseudo-sophisticated opinion about religion freely enrolls new adherents every year.

Three, some leaders are worried that they will be irrelevant—or worse yet, thought of as fundamentalists. The more I work with the laity, the more I am convinced that this is a serious miscarriage of pastoral responsibility. There is a great deal to criticize in fundamentalist literature that misreads and misuses Scripture, perpetuating attitudes that are counterproductive to the demands of the Gospel in the name of being biblical. But wholesale relativism and silence is hardly a useful response. And the sooner mainline Protestantism offers robust, theological guidance, the better off our churches will be.

In early months of this year I have facilitated retreats for mainline congregations exploring men's and women's spirituality. I've taught classes devoted to navigating the death of parents. And I have given talks on the subject of finding and doing the will of God.

What has been eye opening is that in every setting where I have taught—from Texas to Maryland—the reaction has been, "I've never heard this in church." I don't think for a moment that those comments are a tribute to my originality. I think that it says far more about what is missing from the modern mainline conversation: The deep conviction that we have a message, that the Christian life is an ever-deepening journey into God, that the message we have been given makes a legitimate claim on the whole of our lives, and that the only good reason for doing church is to guide and support people in their efforts to respond to that message with their lives.

If we neglect that message long enough, we won't need to worry about having a market. 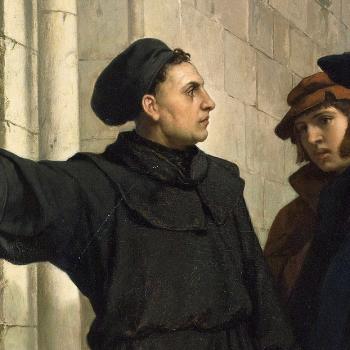 a number of thoughts on Sola :-)
Jared Ingle
4

Jesus Wants Us to Pray
Adrian Warnock
Get Patheos Newsletters
Get the latest from Patheos by signing up for our newsletters. Try our 3 most popular, or select from our huge collection of unique and thought-provoking newsletters.
From time to time you will also receive Special Offers from our partners that help us make this content free for you. You can opt out of these offers at any time.
see our full list of newsletters
Editor's picks See all columnists