Of Gods and Men, Movies and Violence

As our nation reeled in shock and dismay after the mass killings at the premiere of The Dark Night Rises last week, I was preparing for a retreat I will be co-leading with a monk this coming weekend. Our topic: the French movie Des Hommes et Des Dieux (Of Gods and Men).

If you're not familiar with the movie, take the time to watch it. Des Hommes et Des Dieux, released in 2010, won the Grand Prix at Cannes and played to packed cinemas throughout France. Contemplatively paced and beautifully filmed, it tells the story of a small Cistercian monastery in rural Algeria during that country's most recent civil war. All of the monks were of French nationality, making their continued residency in Algeria a matter of risk, since the rebel militants had threatened to kill all foreigners (and, indeed, a number of such murders did take place). The monks could easily have arranged to return to France or relocate to a safer site in Africa. But over the years of the monastery's existence, it had developed a close bond with the mostly-poor residents of the nearby village of Tibhirine.

One of the monks was the only doctor in the area, and ran a free clinic that would see up to 150 patients a day. Others turned to the brothers for friendship, counsel, and employment. The monastery itself had for some years been a center for inter-faith dialogue between Christians and Muslims in Algeria. The monks realized that they were not the only ones facing danger; and fleeing would, in effect, be a renunciation of their witness to love and hope.

So the monks stayed, even after a frightening encounter with one of the rebel groups on a Christmas Eve, and despite repeated calls from the authorities for them to leave. For almost two and a half years after the first threats from the rebels, they continued their daily lives of prayer and service to the villagers. And then, sadly, the day came when seven monks were kidnapped, and later killed.

On the surface, the story of the monks of Tibhirine seems almost absurd. They knew their lives were in serious danger, and yet they remained in harm's way, not as soldiers, but as vulnerable men who stood for peace, for the hope of reconciliation, and the promise that violence need not win the day. They lived this way for over two years, and perhaps if circumstances had been only slightly different, they might have survived and simply continued to live and serve as they felt called to do. Certainly, we know from documents written by the prior of the community, they did not wish to die; but they clearly understood that their natural desire for self-protection had to be submitted to their higher sense of calling--to remain faithful to their identity as monks, an identity built on love, service, and stability.

So what does all this have to do with the recent tragedy in Aurora, Colorado? I am reminded that, in a way, we are all like the monks of Tibhirine. We never know when the path of violence will cross our own. After a horrific event like the Aurora shooting, a flurry of opinions get bandied about, as we try to pin blame and figure out how to minimize the risk of such tragedies recurring. We can blame the motion picture industry, or the gun lobby, or societal attitudes toward violence, or the psychological profile of the socially awkward young male. We can call for more restrictive forms of gun control, or greater security in public places, or for a return to "traditional" values. Maybe these are fine proposals and I am for doing anything reasonable to increase public safety. But I also recognize that the boogieman will always be lurking in the shadows, for it is part of the human condition that we do things to hurt one another (Christians have a name for this: "sin"). Even if we had the opportunity to "go back to France"--that is to say, to take drastic steps in the interest of personal safety--what good would it do, if we leave others behind in harm's way or if the underlying problems that increase the risk of violence are left unaddressed?

The monks did not ask to be in the middle of a civil war; but finding themselves there, they knew that running away would solve nothing. They offered their hospitality to both government loyalists and the rebels, trusting in God that their silent witness to peace might make a difference, however slight, in the interest of peace. Likewise, we who find ourselves in an increasingly violent society can learn from their witness. You and I cannot singlehandedly solve the problems in our society, any more than the monks could broker a cease-fire in Algeria. But we can, and do, make a difference. We need to reflect on whether the difference we make is positive or negative. Are we advocates of hatred and fear in our attitudes toward the entertainment industry, the gun lobby, or people who kill? Do we make social or political choices based on love and trust, or on anger and hostility? Are we committed to revenge, or reconciliation? Do we know how to mourn the dead and wounded in ways that truly honor them, without demonizing those who directly or indirectly caused their suffering? What steps can we take in our lives to foster values that make life truly worth living: values such as friendship, hope, trust, mercy, charity, caring, and forgiveness? How do we spend our money and our time: are the entertainment and lifestyle choices we embrace life-affirming, or potentially destructive? Yes, like a small group of monks in the mountains of Algeria, we can make a difference, a difference that, however humble, still matters: not in how we die, but in how we live. 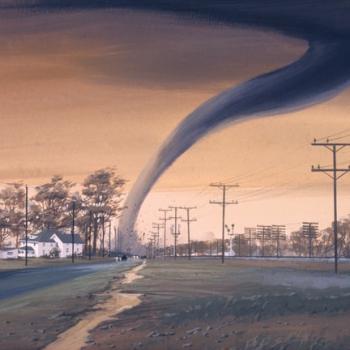 Comments on the Catholic Sex Abuse Scandal
Jonathan MS Pearce
Get Patheos Newsletters
Get the latest from Patheos by signing up for our newsletters. Try our 3 most popular, or select from our huge collection of unique and thought-provoking newsletters.
From time to time you will also receive Special Offers from our partners that help us make this content free for you. You can opt out of these offers at any time.
see our full list of newsletters
Editor's picks See all columnists