"In those days and at that time I will cause to sprout up for David a righteous sprout that will do justice and righteousness in the land" (Jer. 33:15). I have read the phrase literally in order to demonstrate the connection between the verb "to sprout" and the "sprout" that has come up. The traditional reading is, of course, "righteous branch," reminiscent of the famous Isaiah 11 passage where a "shoot will come forth from the stump of Jesse, and a branch will grow out of its roots" (though the verb and noun are different). In both prophets the promise is that someone will someday arise again who stems from the line of David. Of course, Jeremiah here does not have in mind the David of 2 Samuel 11 or 1 Kings 1, that dangerous and sinful David. He means that David of 2 Samuel 23 that last week's reading offered, a David who is intent on the doing of justice for the people. What YHWH promises through the mouth of Jeremiah is a king in the mold of Psalm 72, a monarch who will dedicate life to right actions for the poor and needy, one bent only on justice and righteousness.

And as a result, "In those days Judah will be rescued and Jerusalem will live trustingly. And here is the name by which it shall be known: YHWH is our righteousness" (Jer. 33:16). Instead of the name Jerusalem that appears to mean "establish peace (or unity)," Jeremiah foresees a day when the holy city will instead be known as "YHWH is our righteousness." The implication may be that peace is one thing, but peace without justice is finally no peace at all. Until any city is known as a place of righteousness for all those who live there, any idea that there can be peace is an illusion.

Many scholars say that passages like this one are from a later time than the time of the prophet; that may be so. However, the more significant point is that passages like this have become a canonical part of the prophet's words, and thus a part of the Bible from which we preach. The promise that Jeremiah offers is that our God is forever in the business of raising up leaders who are dedicated to the cause of justice and righteousness for the world. We Christians, because we have come again to the anticipation of the birth of Jesus, must know for whom we wait. We wait for one who will bring us peace with justice, joy with righteousness. We simply cannot have one without the other, because our God does not promise one without the other. So, Happy New Year, and may the place where you live be known as "YHWH is our righteousness."

Teaching the Cold War Through Songs and Music
Philip Jenkins
4 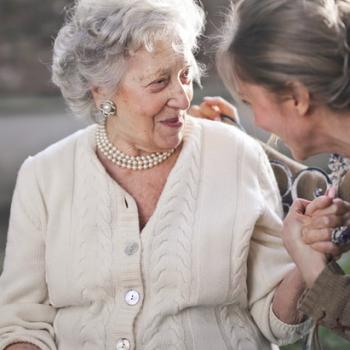 How to Help a Shut-In Loved One
Oscar Collins
Get Patheos Newsletters
Get the latest from Patheos by signing up for our newsletters. Try our 3 most popular, or select from our huge collection of unique and thought-provoking newsletters.
From time to time you will also receive Special Offers from our partners that help us make this content free for you. You can opt out of these offers at any time.
see our full list of newsletters
Editor's picks See all columnists