Of all the stories in the Book of the Acts of the Apostles, this is the one I most try to avoid. I find it nothing less than savage and bestial, a horrifying amalgam of anti-Judaism and barbaric blood lust. The fact that in our twenty-first century world execution by stoning is still practiced is a living reminder of the monstrous cruelty that such an act represents. To hurl rocks at a living human being, slowly stripping off greater and smaller pieces of flesh, crushing bones in legs, arms, and face, creating wounds in too many places to number, suggests to me a torture whose horror is literally beyond anything I can conceive. The sheer intimacy of the deed, its slice-by-slice decimation of a living body, the sound of stone hitting flesh—surely no person with any shred of humanity could participate in such a ritual murder.

But of course human beings did—and do—just that. Leviticus 24, among too many other texts, describes stoning as the only appropriate punishment for blasphemy. The Hebrew Bible is riddled with the ritual of stoning for any number of crimes, from being a wizard (Lev 20:27) to being caught as a thief (Joshua 7:25). And in our own time, women have suffered the fate of stoning in cultures that abhor sexual relationships that transcend some established norm. When the Taliban had free sway over large parts of Afghanistan they often used the fear of stoning to keep women, especially, in line with their rigid views of the world. Stoning is an obscene way to die, staining with blood the victim and staining with shame those who hoist the stones.

The Jews stone Stephen to death. They refuse to hear his sermon that has been directed toward them and their murder of the Messiah Jesus. Echoing Peter's Pentecost address, Stephen excoriates his listeners in terms perhaps even more brutal and nasty than those employed by the fisherman disciple himself. Not only does he pin the murder of Jesus squarely on their shoulders (Acts 7:52), but he claims that this latest murder of an anointed prophet is merely another in a long line of "murders," not always physical ones but always assaults against the Holy Spirit (Acts 7:51). In fact, Jewish history may be summed up in this appalling phrase: "You stiff-necked people (Stephen here aligns the ancestors of Israel with the pharaohs of Egypt, those monarchs who enslaved them for centuries), uncircumcised in heart and ears (using their own distinctive physical ritual against them), you are forever opposing the Holy Spirit, just as your ancestors used to do. Which of the prophets did your ancestors not persecute? They killed those who foretold the coming of the righteous one, and now you have become his betrayers and murderers" (Acts 7:51-52). The murder of Jesus was nothing more than another example of the monstrousness of these Jews who can do nothing but kill those who have come to challenge and finally to save them.

Little wonder that the Jewish audience of this disgusting diatribe refuse to listen to such twaddle, stopping their ears in rage, and rushing to shut Stephen's mouth. I write that last sentence from the viewpoint of the Jews, of course. Why should they listen to such a one-sided, cruel, and bigoted assessment of their own history? Are there not other ways to read the history of Israel? Are there not other explanations of why Jesus dies on the cross beyond a massive indictment of the Jews? Just as Peter's Pentecost sermon cost many Jews through the centuries much pain and death, so has Stephen's hate-filled attack on them and their forebears led to suffering beyond recounting, and in nearly every country of the world.

I can easily see what Luke is about in his telling of this story. Stephen is redoing what Jesus has done already in his passion in the gospel. He works signs and wonders among the people (Acts 6:8); he disputes those who challenge him (6:9); he is arrested (6:12); he is brought to trial before the Sanhedrin (6:12-15); he is taken outside of the city for execution (7:58); there is a division of clothing (7:58), though not his own as it was with Jesus; he prays that his spirit may be received (7:59); he asks forgiveness for his murderers (7:60); he is buried by pious people (8:2). The major difference between the passion and death of Jesus and that of Stephen is of course that Jesus is silent in the face of his accusers while Stephen offers his long and angry sermonic diatribe against those who kill him. To me, that fact makes his call for forgiveness of them rather hollow; they are killers, he claims, because they have always been killers. Can forgiveness genuinely be expected for such unrepentant reprobates?

I can see no way to soft-pedal the dread and shock of this story. When read in isolation from the longer story of Acts, it quite literally sickens me. This is true not only because of the brutality of stoning which is quite repulsive on its own, but also because of the terror of the sermon of Stephen, laden as it is with intemperance and cruelty. What is a preacher to do? 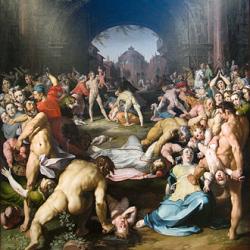 A Different Kind of Christmas Story
Vance Morgan
Get Patheos Newsletters
Get the latest from Patheos by signing up for our newsletters. Try our 3 most popular, or select from our huge collection of unique and thought-provoking newsletters.
From time to time you will also receive Special Offers from our partners that help us make this content free for you. You can opt out of these offers at any time.
see our full list of newsletters
Editor's picks See all columnists