A recent NY Times feature on "God and Mammon" asks the wrong question and focuses on the wrong set of issues. The editorial asks, "Has contemporary American capitalism become incompatible with Christian values?" and, inevitably, the scholars who respond attempt an answer.

The problem is this: There is no inherently "Christian" economic system. Some have attempted to identify one, of course, and a few have even tried their own hand at crafting one. But neither group has been particularly successful in their efforts and neither history nor Scripture offer much encouragement. The one and only governmental (not economic) order proffered in the Old Testament was a monarchy and God cautioned against the decision; and the one time Jesus was asked about the government and God, Jesus instructed his hearers to "render unto Caesar, that which belongs to Caesar." That doesn't mean that the Christian tradition might not move to identify a distinctive form of economic or governmental order, but it certainly isn't encouraging.

Hence, my own take on the subject: Christians need to bring their understanding of sin to bear on their evaluation of all economic and governmental systems, rather than look for the one that is compatible with their beliefs. There is no "Christian" order; there are only systems that are more or less susceptible to manipulation and abuse and, therefore, take the Christian assessment of the human condition more or less seriously.

Capitalism remains the best of economic systems not because it is compatible with Christian values, but because it decentralizes power and wealth better than any other system and, therefore, creates a space that is open to some measure of scrutiny, criticism, and correction. That's not to say that it is perfect. But other systems, including those that try to impose that decentralization from the top down, fail the test—not because of their goals, but because they centralize the power to achieve those ends in the hands of a few bureaucrats or autocrats and because they hold that those bureaucrats can be trusted to act in the best interest of everyone.

Sadly, they can't be and they aren't; and a Christian understanding of the human condition knows that no human being can be trusted with that responsibility. Greed and corruption are part of the human condition. So, inevitably, bureaucrats, dictators, and oligarchs—no less than the rich or influential in a capitalist system—are subject to greed and the abuse of power. The fatal flaw in the alternatives to capitalism is that those systems centralize power which, in turn, maximizes the possibility of abuse. Take, for example, the crimes committed by bureaucrats at the Veteran's Administration who doctored the records, allowed people to die, and collected bonuses.

The other problem with the alternatives to some variant of capitalism is that their architects offer a system as a substitute for standing vulnerably before God where we are responsible for the exercise of our freedom. That, I suspect, and not monarchy alone, lies at the heart of the Old Testament's condemnation of Israel's desire for a king. Every time that the Israelites attempted to find an alternative to depending upon God, the prophets roundly condemned them. Chariots and kings were, from the prophets' point of view, a dangerous alternative to dependence upon God, a flight from moral responsibility, and inevitably silenced the critics of those who controlled the systems, policies, and treaties offered by Israel's leaders.

Christians on both ends of the spectrum make a mistake by asking which system is compatible with their faith. What Christianity needs is the independent judgment that can only be achieved through careful attention to the will of God. Attentive devotion to the will of God is the only thing that will give Christians the independent judgment needed, whatever the system in play. The moral imperative for Christians remains love, mercy, and care for the widowed and orphaned. Capitalism doesn't speak to those issues, but Christians who live within its confines must not only speak to those needs, but act to meet them. No alternative economic system will absolve us of that responsibility. 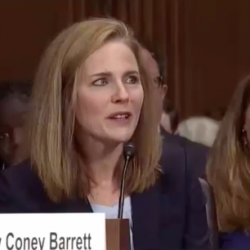 John Grisham's Camino Winds
Ben Witherington
Get Patheos Newsletters
Get the latest from Patheos by signing up for our newsletters. Try our 3 most popular, or select from our huge collection of unique and thought-provoking newsletters.
From time to time you will also receive Special Offers from our partners that help us make this content free for you. You can opt out of these offers at any time.
see our full list of newsletters
Editor's picks See all columnists