You Are a God Who Hides Yourself: Reflections on Exodus 3:1-15

Each time the lectionary offers to us this pivotal text, rather than its words popping into my mind, I admit that "that movie" runs there first. Yes, I mean of course the Cecil B. DeMille 1956 four-hour epic, The Ten Commandments. Each year, especially around Easter (for reasons I cannot quite fathom), this film is shown on multiple cable channels multiple times. Even before the advent of cable TV, one of the major networks (in the olden days) would without fail screen the picture for viewers who could not seem to get their fill of Charlton Heston, at his stentorian best as Moses; Yul Brynner, bald and beautiful as Pharaoh Ramses; and Yvonne De Carlo, vamping as only she could, wooing the reluctant hero who has bigger fish to fry than the rich life of an Egyptian prince. I admit to finding the movie more hokey than heroic, more lackluster than laudable. Still, Edward G. Robinson does make a hilarious Aaron!

Why does that film haunt the mind? It was one of the very first big-budget biblical movies. I am old enough to have seen it on the big screen, with intermission, not long after it appeared. Did you know it won only one Academy Award, and that for special effects? With what can be done now with CGI, all things computer, those effects look somewhat laughable. The great event of the parting of the sea (still worth seeing nonetheless) was performed by using Jello! Yes, Jello! And when Moses confronts the burning bush, its unquenchable flame does not wholly convince, however grandly the voice of God/angel booms from the fire. Because we live in a hugely visual culture, with all things media crowding our eyes, I think it fair to say that many more folks have seen the movie than have read the book, or perhaps better said, more remember the movie than remember the book.

And that is sad and dangerous in so many ways. Movies assault the senses, grab us in their grasp and will not let us go. Books offer themselves to us, luring us to read and engage, but we may not be lured and may not engage. I suggest that fewer and fewer people over the past three generations or so have been lured and engaged in the Bible's story. Hence, many are left with Heston as Moses, the hero figure set in the mind's concrete as very tall, extremely handsome, big-chested, blessed with a voice for the ages. Brynner is forever Ramses II, resistant to follow the increasing demands of Moses, and shouting his repeated command, "So let it be written; so let it be done!" And De Carlo, madly in love with the fabled prophet, that has no biblical basis whatever.

The Bible simply goes in none of these directions. It focuses on a thoroughly reluctant Moses, not reluctant to give in to the blandishments of the stunning De Carlo, but reluctant to do what the burning bush demands that he do. And it focuses on YHWH, who is also reluctant, reluctant to be fully revealing of who YHWH is and who hides God's essence behind the incendiary bush and the thickets of Hebrew syntax.

As it has long been noted, the Bible's Moses employs five increasingly lame excuses why he of all people should not go back to Egypt to effect the release of the Israelites from slavery. He questions himself (Ex. 3:11), his God (Ex. 3:13), his lack of tricks among the very trick-filled Egyptians (Ex. 4:1-9), his supposed poor elocution (Ex. 4:10-12), and finally, and most truthfully, he asks God to choose someone else (Ex. 4:13), something he apparently has thought from the very minute the bush started talking. Here is no big-chested, grandly-haired, man of power, but a little weasel, conniving to get out of the call of God. I always imagine that such a figure should be played by Woody Allen or Ben Stiller, or even Jim Carrey in his less manic mode.

When I preach from this wonderful text, and I have more than once, I readily admit, I usually focus on the figure of Moses as a model for my own unwillingness to perform the work of my God, however much I claim to want to do it. And his excuses too easily match my own, my self-questioning, my refusal to act for a God I cannot fully understand, my poor skills, my limited oral abilities, and at last, my general hope that God will go elsewhere to find a servant.

But today I wish to look a bit more closely at the God who calls from the bush and especially that memorable, but mysterious, announcement at Exodus 3:14-15. I cannot begin to enumerate the vast amount of ink and bytes that have been spilled over these two verses. To paraphrase Koheleth, "Of the making of many comments on Exodus 3:14-15 there is no end," so let me add my three cents (it is a time of low inflation, is it not?) to the flow.

Moses cheekily demands from the talking bush a name: "If I come to the children of Israel, and I say to them, 'The God of your ancestors has sent me to you,' and if they say to me, 'What is God's name?' what will I say to them?" (Ex. 3:13) It seems a very straightforward request for the name of God. But if anything may be said about God's reply, it is not at all straightforward. I picture the bush puffing itself up to its full leafy height, and booming in its best preacher's voice (choose whichever one you like; James Earl Jones, Judy Dench, Orson Welles, Phyllis Diller?), and saying, "I am who I am" (NRSV), or something like that. The Hebrew is ehyeh asher ehyeh, and here, I think, are the other possibilities of translating the thing: "I will be what I will be"; "I will be who I am"; "I am what I will be." I have read a translation of "I cause to be what I cause to be," but the Hebrew verbs are plainly not causative in form. What are we to make of that? 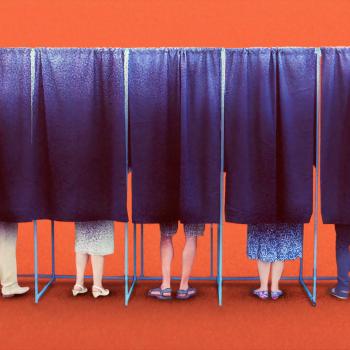 The Election Probably Won’t Be Over on November 3 (and How Churches Can...
Shaunti Feldhahn
4

Surveying the Early Church’s View of Hell
Richard Murray
Get Patheos Newsletters
Get the latest from Patheos by signing up for our newsletters. Try our 3 most popular, or select from our huge collection of unique and thought-provoking newsletters.
From time to time you will also receive Special Offers from our partners that help us make this content free for you. You can opt out of these offers at any time.
see our full list of newsletters
Editor's picks See all columnists