When we arrive at Exodus 33, we find a Moses who has been through the wringer. He has been called by God to do the impossible: to bring Israel out of the slave pits of Egypt by confronting the world's most powerful ruler armed only with a stick and the word of YHWH. Astonishingly, he does it! Israel escapes (or marches out in triumph, depending on which of the stories you prefer), and though they are soon trapped between Egypt and the Sea of Reeds, again they survive and triumph by the power of YHWH and the word of Moses.

But that is hardly the end of Moses' trials with this people. There remain the demands for water (twice) and for food, to which YHWH responds with quail and the mysterious manna (Hebrew "what is it?"). Upon arrival at the sacred mountain (named either Sinai or Horeb), Moses goes up the mountain and disappears into the fire and smoke at the summit in order to chat with YHWH. Before he goes he deputizes Aaron to handle any disputes that may arise while he is gone. A dispute, of course, arises, and Aaron "handles" it by forming a molten calf that leads the people into acts of evil as well as the shattering of the first two commandments that Moses brought down from the mountain with the purpose of ordering their lives.

Rather than accept YHWH's offer of destroying the ingrates, and to be made, like Abraham, the founder of a new "great nation," Moses offers himself on behalf of these wretched folk, saying he would rather be dead than live in a world where YHWH refuses to forgive sin, even massive sin like rejecting YHWH and worshipping molten calves.

Thus we and Moses arrive at Exodus 33 where YHWH demands that the "stiff-necked" Israelites must "take off their ornaments, and I will decide what to do with you" (or perhaps "what I will make of you") (Ex. 33:5). They do so, and things appear to go well for a brief time while Moses goes in and out of the tent of meeting to discuss things with YHWH, where YHWH "speaks to Moses face to face, as one speaks to a friend" (Ex. 33:11). However, Moses, perhaps emboldened by his extraordinary relationship with YHWH, the amazing demonstrations of power given to him by YHWH, pushes his demands for knowledge of YHWH too far.

He should remember, as should we, that at the burning bush, at the beginning of his relationship with this God, his demand to know the name of God was in effect rebuffed, as I tried to argue when that was our text for preaching (Ex. 3). There I said that the famous "I am who I am," the traditional way to translate the clause, was finally a dodge on the part of YHWH, an ultimate refusal to reveal God's name. Either Moses has forgotten this fact, or he now feels that he can know much more about the God for whom he works. Thus he begins to push YHWH for more divine information.

Moses said to YHWH, "Okay (literally "see"), you have said to me, 'Bring up this people,' but you have not let me know whom you will send with me. Yet you have also said, 'I know you by name and you have found favor in my eyes'" (Ex. 33:12). This is a most intriguing sentence, designed to force YHWH to act as Moses wants God to act. But in fact, it suggests something else about Moses; he is a very poor listener, or he chooses not to take seriously what YHWH has told him; because in Exodus 33:2-3, YHWH has made it quite clear that an angel will be sent with the people, who will drive out those peoples who currently live in the land of promise. But YHWH, the God, cannot go with them, because "you are stiff-necked" and if YHWH went with them, YHWH would "swallow them off the face of the earth." The people of Israel have shown again and again that they are simply not worthy of YHWH's presence with them, and so only an angel will lead them. Hence, Moses' claim that he has not been told "whom YHWH will send with them" is just not true. Yet, he goes on to attempt to coerce YHWH to act as Moses wishes with a bit of blackmail: you claim to know my name and you claim that I have found favor in your eyes, so "show me now your ways (Hebrew derek) so that I may know you and (really!) find favor in your eyes" (Ex. 33:13).

YHWH's statements that Moses is known and is favored by God are not enough for the cheeky Moses. He thus first demands to see YHWH's "ways." This is a very general term, meaning "actions" or "movements." Moses appears to demand that YHWH come clean about precisely how YHWH acts in the world.

YHWH is having none of it. "My face will go with you and I will give you rest" (Ex. 33:14). Moses will not see the "ways" of YHWH, but he must accept and rely upon YHWH's face and YHWH's gift of rest, comfort. But Moses is unsatisfied with YHWH's response. "If your face will not go with us (but YHWH just said that the face would go with them!), then do not (bother to) bring us up from here" (Ex. 33:15). I add "bother to" to my reading to suggest that Moses is being petulant, because YHWH is not responding to Moses' special demands. Or, one could say, that again his hearing is none too good; YHWH says clearly that the face of God will go with them, but Moses immediately says that if the face will not go, YHWH should just forget the whole thing. After all, without YHWH's face it can never be finally and conclusively known that Moses and his people have found favor with YHWH, and that it will not be clear that this people is "unique from every other people on the face of the earth" (Ex. 33:16). 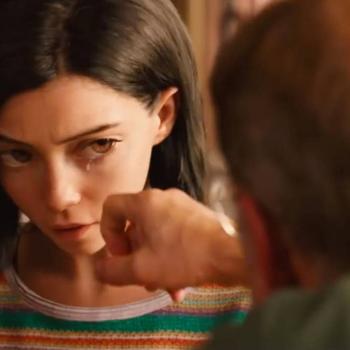 The Divided Man: What We Can Learn From Ravi Zacharias
Esther O’Reilly
3

Silver-Bullet Argument #28: Because Heaven Is too Horrible to Endure
Bob Seidensticker
4

The lynch mob
Fred Clark
Get Patheos Newsletters
Get the latest from Patheos by signing up for our newsletters. Try our 3 most popular, or select from our huge collection of unique and thought-provoking newsletters.
From time to time you will also receive Special Offers from our partners that help us make this content free for you. You can opt out of these offers at any time.
see our full list of newsletters
Editor's picks See all columnists