I have been writing these Old Testament (or Hebrew Bible or First Testament) reflections for nearly five years, and I have been very gratified at the many ways some of my thinking, however muddled at times, has found its way into the sermons of some I know and many I do not know. I am humbled, really, that so many of you read my stuff and find in it a few morsels for your own thinking. Patheos has been my vehicle for these years, and the wonderful and supportive and careful editor, Deborah Arca, my mainstay, as I have tried weekly to think about the ancient text.

Along the way, I have, I hope increasingly, focused my attention on the issue that now must be recognized as the most important one that our planet faces: the assault on God's creation. We preachers can no longer avoid the facts of our ailing planetary home. At the risk of monumental hubris, let me quote myself from my 2011 book, Preaching Creation:

The wrong things are rising: temperatures, oceans, carbon content in the air; and the wrong things are falling: rain forests, water tables, oil and gas reserves. We are clearly on a head-on collision course between our desires and our resources to fulfill them (Holbert, 1).

I am writing this exactly eight days before Christmas 2014. Just last week in Lima, Peru, over two hundred nations, for the first time, pledged to reduce their carbon emissions significantly, while the wealthy nations pledged to help those poorer nations to move their energy production away from fossil fuels to more sustainable sources: wind, geothermal, and solar, among others. It is the tiniest of steps, and because there are no sanctions built into the agreement, it would be easy to express cynicism and a dark hopelessness, especially in the face of India's recent announcement that it plans to build a coal-fired power plant every week (!) to attempt to satisfy the power needs of a huge and demanding population.

Still, for us optimistic Christians (and there can be no other kind!) the Lima agreement is a step in the right direction. Unfortunately, those steps will remain too small as long as we elect politicians who remain unaware of what real scientists have been saying for nearly two generations, namely that climate change is real, and the main cause of it is our unbridled burning of fossil fuels, raising the carbon count in our atmosphere to near 400 parts per million. Some years ago, it was said that if the atmosphere becomes saturated with carbon of 350 parts per million, a turning point might be reached where temperature rise was irreversible, and the possible horrors of a new and hotter planet, unseen for millions of years, would be upon us. As you can see, that boundary has been breached.

I am not a scientist; in my college days even the approach of the day of lab science, required in my college, brought tingles of dread to me. I suffered these courses so as to have more time for poetry and novel and philosophy. Still, though I am surely not a scientist, my study of poetry and novel and philosophy taught me two things well; how to read and how to assess an argument critically. Because I can read and assess, I know for certain that Senator James Inhofe of Oklahoma, the incoming chair of the Senate committee that is in charge of environmental matters, is thoroughly and unequivocally wrong when he denies that the planet is warming due to the actions of humans. He refuses to read what is so certain, and seems quite proud of his ignorance of these matters, being blinded by the oil and gas interests in his state, interests that have in part made his reelections to the Senate possible.

I am also not a senator, obviously. But I am a preacher, and I can preach to my congregation what is in fact real. I urge each of you to study these questions carefully, and to read good literature on this subject; my book mentioned above offers a list of books and articles that can be helpful. But today I want to look at Psalm 148 as a model song for those of us who want to find our true place in God's creation. For as the Bible makes certain, in as many ways as it can, you and I, we human beings, are decidedly not in the center of God's creation. We are an important part of that creation, but, like our mentor Job, we are not at its center. And the first thing we must learn is that reality.

Psalm 148 focuses its attention on the non-human praise of God; nature itself, we are told, is in the continuous business of praising its creator. Nature is alive to God, it says, and is acted upon by God; we humans are not the only creatures who praise God. Psalm 148 rings beautiful changes on the opening words of Psalm 19. Here it is in my own translation:

The skies are writing the glory of God,
and heaven's vault narrates the work of God's hands.
Day bubbles forth speech to day,
and night proclaims knowledge to night;
Without speech, without words —
their voice is not heard.
Still, their lines stretch throughout the earth,
their words to the world's ends! 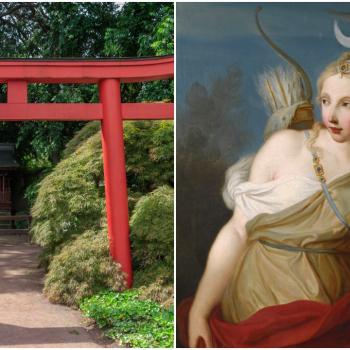 Pagan & Shinto News: 5,000 Sign Petition to Demolish Decorative Torii Gate in...
Megan Manson
Get Patheos Newsletters
Get the latest from Patheos by signing up for our newsletters. Try our 3 most popular, or select from our huge collection of unique and thought-provoking newsletters.
From time to time you will also receive Special Offers from our partners that help us make this content free for you. You can opt out of these offers at any time.
see our full list of newsletters
Editor's picks See all columnists